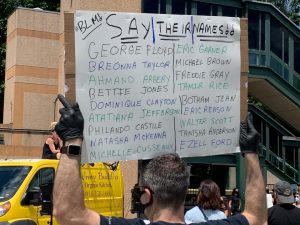 A protester at Sunday afternoon’s rally in Mount Kisco holding a sign with the long list of names of people of color who were killed by police.

Community members united at Mount Kisco’s Kirby Plaza Sunday afternoon to demand justice for George Floyd and the many victims of police violence in the United States.

A diverse crowd of a few hundred people, intermittently chanting “No justice, no peace” and other slogans, collectively called for the end of brutality toward communities of color. Many held signs, including one that listed the names of black and brown people who have died at the hands of police.

The peaceful rally and march through the village’s downtown was organized by Shaka the King and Elyce Jacobsen, owners of Mount Kisco’s Skinny Buddha Organic Kitchen. Shaka the King shared his experiences and referred to the crowd as a family that needs to start a dialogue before leading the march.

Once the march returned to Kirby Plaza, there was a succession of speakers who implored those on hand to fight for change.

Alexis Rogers, a teacher in Brooklyn whose students are predominantly pupils of color, said the movement to combat systemic racism is hardly new. She said she was encouraged by the crowd and those who have an open mind and want to grow.

Dylann Wright, a young woman who was joined by her two cousins, spoke of an experience she had with a police officer. Wright said she was once followed by a police officer who pulled her and her cousins over for no apparent reason while driving home from getting snacks at a local store.

“I was scared. I didn’t know if I was going to lose my life that day,” Wright said while fighting back tears. “In front of my cousins, the people that I love more than anything in the world, my sisters, my brothers.”

The crowd cheered her on and supported her by calling out “We hear you!” and “We are here for you!”

“I’m just trying to live, just like everyone else,” Wright continued. “I don’t want to have to worry if one of my family members will become the next hashtag. I’m tired of hashtags, I’m tired of seeing my black brothers and sisters dying every day.”

Rodney Byrd was another demonstrator at the rally. He said it was important for people to understand that the longtime systematic racism not only hurts people but divides society.

“Support the unity and power of all people, but most importantly black people, that are being gunned down and murdered senselessly all through America,” Byrd said.

Sunday’s rally was one of a growing number of protests, vigils and rallies held throughout Westchester spurred on the May 25 killing of Floyd, a 46-year-old African-American man who died after a Minneapolis police officer held his knee on his neck for close to nine minutes.