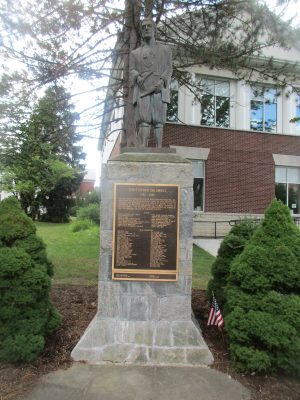 The Christopher Columbus statue in Mount Kisco is the latest monument that has come under scrutiny by those seeking racial justice.

A petition organized by a lifelong Mount Kisco resident is urging village officials to remove the Christopher Columbus statue that stands outside the public library, renewing conversations over the portrayal of his legacy.

Kaitlynn Hurtado, the 26-year-old petition organizer, is calling on the mayor and Board of Trustees to remove the statue, citing Columbus’s history of colonialism and enslavement of Indigenous peoples.

Hurtado told The Examiner that the momentum sweeping across the country concerning monuments depicting historical figures who have subjugated others amid racial justice protests empowered her to protest the Columbus statue. This is not the first time community members have protested the statue, she said.

“We’re all learning from this movement and from everyone speaking out, so I’m listening and I’m like, ‘Why do we have a Columbus statue in this town? Why would I want that to be standing tall in my town?’” Hurtado said.

The Village Board had approved locating the Columbus statue in the village in 1991, and the Italian American Club of Northern Westchester erected it the following year, commemorating the 500th anniversary of the explorer’s initial voyage to the New World. A plaque beneath the statue reads that it was erected to “symbolize that as Americans, we are an immigrant society.”

Italian American Club President Phil Simone was reached but declined to speak about the issue in a telephone conversation.

More than 800 residents from Mount Kisco and surrounding communities have signed the petition to remove the statue. Many included reasons for signing that ranged from “Columbus was a murderous villain” to “it’s long overdue.”

“It is appalling to see a Christopher Columbus Statue in this town,” the petition reads. “Christopher Columbus has been well known for his numerous acts of violence when arriving to Hispaniola…Instead, we should be celebrating a local character who has done right by their community.”

Mayor Gina Picinich said last week that the Village Board had not yet received the petition. She added that the town will only accept the petition once it includes the signatories’ addresses, explaining that she wants to limit conversation over the statue to Mount Kisco residents and local business owners.

“We appreciate there’s a broader conversation going on nationally,” Picinich said, “but the conversation we will have, should the petition be submitted, is with the people within our community.”

Debate over how to address the Columbus statue continues to boil over online. While many former and current Mount Kisco residents say they want the statue torn down, others wrote that they oppose the move, commenting on the village Facebook page: “leave it up” and “stop tearing down history.”

Some residents also said they support an alternative solution: Give the statue more context, instead of removing it. Shantae Artis, a Bedford Village resident who was raised in Mount Kisco, said the village should recognize and remember the history of Columbus, making clear that “there is no reverence of the man.”

“The effigy of Christopher Columbus causes pain,” Artis said. “What Columbus stands for needs to be understood. Make it known that this was why it was erected and this is how we resolved our differences as a town. That speaks more volumes than just tearing things down.”

For Artis, telling this complicated story could mean erecting additional statues and plaques around the Columbus statue to contextualize it and represent the diversity of the village.

Still, Hurtado said she doesn’t see the point of preserving the Columbus statue in such a prominent location, and hopes one that represents every community in the village will replace it.

Communities across the region and country have already watched Columbus statues being brought down elsewhere. One was found on July 4 without a head in Waterbury, Conn., the same day protesters in Baltimore toppled a Columbus statue and tossed it into the harbor. In late June, a Columbus statue was removed in Norwalk, Conn.

As Mount Kisco grapples with the issue, Picinich said the Village Board’s response to the matter will depend on the needs of the community, putting aside the personal opinions of trustees. The village manager or the board must approve any activity that happens on town property, she said.

“It’s important that everyone’s voice is heard, that every individual be given the opportunity to share their view, that we find ways to build and strengthen community,” Picinich said.