By Martin Wilbur and Joan Gaylord 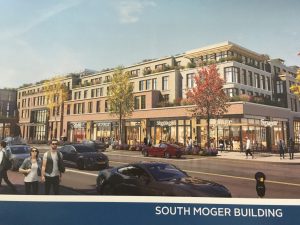 An artist’s rendering of the mixed-use development planned for the South Moger  parking lot in Mount Kisco by Gotham Organization, Inc. and its development partner Charter Realty & Development.

What could be the most significant development in Mount Kisco in more than a generation is likely at some point to generate more than its share of community interest in 2020.

The project, Kirby Commons, a two-parcel, 217-unit, mixed-use proposal with 51,600 square feet to be split between the North Moger and South Moger lots in the heart of Mount Kisco’s downtown, promises to transform the area around the train station by putting people where officials want the focus to be – downtown.

Along with nearly 900 parking spaces – the village would maintain the same number of commuter spaces as there are now – in a multilevel structure at each site, rooftop greenspace and a 3,100-square-foot community center that could be used by the Mount Kisco Arts Council as gallery space, officials hope they have the workings of a plan that would provide the center of the village’s commercial district the jolt needed to set it apart.

There’s little doubt that it’s an exciting undertaking. But for local officials to consider, how much would it change the village and would it be the right type of change?

Mayor Gina Picinich said change has been happening to Mount Kisco for more than the past decade without the village courting its arrival. That includes the rise of online shopping and the aftereffects of the Great Recession that led to a spike in storefront vacancies. While the vacancies have diminished, it’s up to municipal leaders to take on an initiative for the long-term health of downtown.

“What we have to do is maintain this beautiful fabric of this village but manage the change, and the big change for us is figuring out a way to build a long-term viable economy downtown, and we have to do that in a way that generates more foot traffic, and if possible, reduces vehicle traffic,” Picinich said. “The solution for that is putting people where the businesses are.

“This is what this is all about, so, finding a partner who understands who we are and doesn’t want to change the village, wants to enhance what already currently exists,” the mayor added.

Following the Mount Kisco Village Board’s Nov. 18 approval of a letter of intent to sign a 99-year lease, the village’s development partners are Gotham Organization, Inc. of Manhattan, which would develop the residential component, and Greenwich, Conn.-based Charter Realty & Development, with its experience in commercial projects.

Gotham, which lists 1912 as its founding date, has increasingly developed high-end apartment complexes over the past 20 to 30 years, mainly in New York City, moving away from its development of public buildings such as hospitals and schools generations ago. Picinich said that Gotham, one of three entities to respond to the village’s Request for Proposal (RFP), presented a design that most of the board thought would be best for Mount Kisco.

“The scale needs to be transformative to be effective,” Grunthal said. “And it has to be of a size that will be financially viable to the developer.”

He expects the apartments will appeal to young professionals who will commute into New York City as well as active, older residents who will appreciate a vibrant, walkable downtown. The retail spaces could draw restaurants, including the possibility of a microbrewery, and an upscale grocery, Grunthal said.

For Picinich, the units would provide the type of housing that’s not only absent in Mount Kisco but surrounding communities as well. The one- and two-bedroom rental units, both with and without dens, and a small number of studio apartments on the North Moger side of the project, would see a nearly even distribution of units between the sites. Estimated unit sizes are 800 to 1,340 square feet at the South Moger site with slightly smaller apartments on North Moger.

During Gotham’s November presentation, representatives estimated rents would be between $2,667 and $4,355 a month on the South Moger site and from $1,880 to $3,160 for the North Moger building.

“What we don’t have right now in Mount Kisco is an offering of quality rentals, and the truth is in northern Westchester an offering like this does not exist,” Picinich said. “So this actually fills a gap. These are rentals, different than condos and co-ops, which go for purchase. A different target audience there. (This is for) people who don’t want to buy something. Some people want to rent, and so I believe this fills a need because this doesn’t exist.”

Fifteen units would be reserved for tenants earning 90 percent of area median income. Mount Kisco, a socioeconomically diverse community, was not one of the 31 communities included in the county’s 2009 affordable housing settlement with the federal government.

Certainly, there will be issues for the developer and the village to address. Deputy Mayor Jean Farber said traffic and congestion are the perennial challenges for Mount Kisco. She said the plan would be to begin construction on the North Moger parking garage in an effort to address the parking situation.

Picinich said the developers intend to keep the road open between the back of the current South Moger lot and the train station to help with vehicular flow.

Trustee Karen Schleimer, the dissenting vote on the letter of intent, said the village was taking too large a risk diving into the project. She said she supported trying the North Moger site as “a trial balloon,” rather than committing to a 99-year lease on both sites.

“This is being done on such a huge scale,” Schleimer said. “It could be a big hit or it could be a total flop. We don’t know and I’m concerned.”

She is also worried about the impact on local businesses during construction, a time when traffic and parking will be even more challenging than usual.

Schleimer said the anticipated rents are extremely high for the community and that if a resident were to commute into Manhattan that would cost them another $383 a month from Mount Kisco.

“These are expensive,” she said of the projected rents. “A two bedroom with den for $4,400 a month? You can rent a house for less.”

Then there is the issue of two federal lawsuits filed in 2019 against Gotham by the Fair Housing Justice Center, a nonprofit organization that advocates for housing for people with disabilities. Last May, the plaintiff filed litigation alleging that two buildings built in the past four years by Gotham, The Ashland, a 53-story, 586-unit residential rental building in Fort Greene, Brooklyn and The Nicole, a 20-story, 145-unit building located in Hell’s Kitchen, Manhattan, had too many areas inaccessible by wheelchair.

Gotham released a statement saying it is “fully committed to providing accessibility for all individuals in their multifamily residential units.

“We aim to build the highest standard of accessibility,” the statement continued. “Gotham has a more than 100-year history with civic nonprofit organizations across the city and state and with being a gold standard in the communities in which we participate. We’re working with the Fair Housing Justice Center and understand how we can ensure our existing portfolio and our future developments achieve and exceed their expectations.”

Picinich said she was satisfied that Gotham would adhere to all local, state and federal guidelines, and that many of the lawsuits brought by organizations such as the Fair Housing Justice Center are test cases.

“Their proposed development here in Mount Kisco, they are deeply committed to the buildings being fully, fully compliant in addition to being this best-in-class development organization, which they are,” she said.

Picinich said she expects that Gotham will obtain its lease access agreement in 2020, which will permit it to go onto the land and finalize the formal contract. The applicant would go to the Planning Board for site plan review with a formal application.

Given the complexities of the project, Picinich doesn’t foresee a very complicated site plan review because of last winter’s update of the village’s Comprehensive Plan and ensuing rezoning of the parcels in question. Gotham completed its general design of the project to the standard of the village’s new form-based code’s overlay district, she said.

Once approvals would be granted, construction is expected to last two years.

When construction is finished, Farber said the project would offer many benefits, particularly the new apartments. Farber said the targeted demographic of young professionals and empty-nesters would help, not hurt, the Bedford School District.

“The school district will get the extra money from the additional taxes collected but it will not have to deal with significantly more students,” she said.

Picinich said positioning Mount Kisco to be competitive years into the future is the goal.

“We need to be building, growing, not just for today but we need to be thinking about the future as well and we want something in our downtown that’s sustainable and that adds value,” Picinich said.