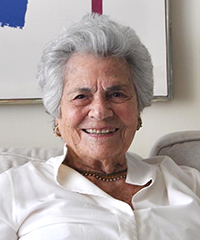 Marianne E. Steiner, who fled Nazi Germany as a girl by enrolling as a student in Belgium and England and went on to live the American Dream, died Friday. She was 101.

Known for her unshakably optimistic attitude, Ms. Steiner was born Marianne Esberg in Braunschweig, Germany to a family of successful livestock traders. She often described an idyllic early childhood of family gatherings and fun but as she became an early teen, as the Nazis influence rose, she would recall looking out her window horrified to see Nazis marching in the streets.

By 1933, her parents made the wise decision to send her to a Catholic school that would protect her in Ghent, Belgium. Ms. Steiner recalled being only one of two Jewish girls, though she’d never tell anyone she was Jewish. Her father, looking to avert the authorities, stored money in the back of her camera, which she would give to her uncle Ivan in Belgium.

In 1937, Ms. Steiner would transfer to England to study at the Reimann School of Art and Design, a Berlin-based private school that moved to England after Nazi persecution. Always with an eye for color and design, she studied window display.

By 1938, the oppression against Jews had become too much to bear for her parents in Germany. Once the police came to confiscate their passports, her father went to the local police to ask how they could retrieve them. By paying up, they were fortunately able to get the documents and then escape the country. While the family considered immigrating to Sweden, they chose America, stopping in England to pick up Marianne and her late brother, the accountant Andy Esberg, before boarding a ship to New York.

Settling on the Upper West Side of Manhattan, the Esbergs rented out rooms, and one of the renters was a young Austrian Jewish writer named Paul Steiner, whom Marianne immediately said she wanted to marry, and as with most things for the rest of her life, she got her way. They had their only son, Tom, and moved to the suburb of Harrison, New York.

Meanwhile, during World War II, the Reich had confiscated Ms. Steiner’s father’s property in Wolfenbuettel. In an odd twist, it was sold to Curt Mast, mostly known as the creator of the popular liquor Jaegermeister. He was a member of the NSDAP, and he profited highly through the distribution of Jaegermeister, called Goering-Schnaps among German soldiers, during the war. After World War II, Ms. Steiner’s uncle, Ivan Esberg, conducted a lawsuit against Mast, which was then settled in a mutual agreement (source: Leo Baeck Institute).

Back in Vienna, the late Mr. Steiner, who successfully fled Austria in 1939 after one failed attempt, had studied law and had aspirations to be a writer. In the United States, he would turn to publishing, launching Chanticleer Press, which is regarded as the first of the nation’s book packagers, an entirely new business model, as the Times wrote in his obituary. Mr Steiner’s biggest success was dreaming up the popular “National Audubon Society Field Guide,” believed to be the first guides to use photographs of birds rather than drawings, which has sold more than 29 million copies.

Entering Ms. Steiner’s home on Fifth Avenue, where she’s lived since the 1970s, was the near equivalent of entering a wing of a small museum of antiquities. Ms. Steiner would proudly and cheekily tell people she only collected B.C. art, which she and her husband would often acquire on trips abroad.

The piece de resistance were Cycladic sculptures from the mid-2000s B.C. that are considered canonical. According to the Los Angeles Times, the Getty Museum spared no effort to acquire the female idols from Mrs. Steiner, which they did in 1988.

A fierce lover of New York City, Ms. Steiner relished every opportunity to soak up the city’s arts, including at the Metropolitan Opera, and was independent well into her 90s, living in her Upper Manhattan apartment overlooking Central Park. She read book after book even after her 100th birthday.

Known for her vibrancy, we can only assume her longevity was due to some combination of genetics, staying physically active, keeping her stimulated by books, art, and music, and regularly quaffing a good, stiff drink.

Active in philanthropy, the organization she supported most was Leo Baeck Institute, a New York and Berlin-based research library and archive focused on the history of German-speaking Jews.

The Steiner family held a private service Monday in her beloved Central Park.

In lieu of flowers, Ms. Steiner and her family would love if you donated to the indispensable organization that holds the archives of countless German Jewish families, including ours: The Leo Baeck Institute, at www.lbi.org/support.