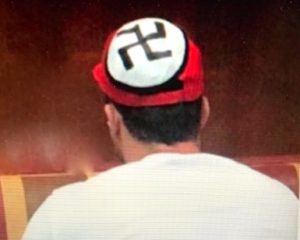 Image of a man eating at City Limits Diner Friday during the lunch rush that was circulated on Twitter.

After several reports of anti-Semitic graphics and messages being left on public property during the days around the Jewish high holy day of Yom Kippur, a man wearing a swastika drawn onto a white kippah on top of a baseball cap, with earplugs in his ears, boldly walked into the City Limits Diner in White Plains during the Friday lunch rush, sat down and ordered a meal.

He was later asked to leave the restaurant by White Plains police.

A message posted to Facebook over the weekend by Nick Livanos, the restaurant owner, indicated that the serving staff did not initially see the offensive symbol, but when they did, the owners were immediately notified and the police were called.

A tweet by the Livanos family on that same day said, “We responded to the situation by calling the police. We followed instructions to await their arrival so as to avoid a confrontation and for everyone’s safety. When the police arrived, the individual was escorted from the restaurant per our instructions.”

Some customers, disturbed by the incident left the restaurant and were later quoted by News12, saying the offender was probably within his First Amendment rights, “but to be that blatant and display that kind of hate in a public place had to be called out.”

“Unfortunately as offensive as his display was, he did not threaten anyone and just sat down to eat,” White Plains Public Safety Commissioner David Chong told the Examiner on Saturday. “The other customers were upset and the owner didn’t want to serve him. We checked his credentials and ran his name through all the intelligence systems. He had no priors and since the property was his own, as offensive as it was, it did not meet the level of a crime. He claimed that it was his constitutional right to free speech and expression and he is correct. After we escorted him out, we forwarded his information to the State Terrorism center,” Chong said.

Postings on the City Limits Facebook page about the incident indicate a broad range of opinions about how such situations should be handled and illustrate some confusion in the general public about First Amendment rights.

The Examiner communicated with a civil libertarian lawyer by email on Sunday, asking what is appropriate pushback in such a situation and where is the legal line drawn?

The legal response is that the First Amendment applies only to acts by government. The City Limits diner is not a government entity and the owners are entirely free to ask another to leave their privately owned business (as they also would in their home), “because the first person does not care for the second person’s expression of opinion. The issue is not of law, but of good manners, on both sides. There is a limit to good manners, and ignoring a swastika passes that limit for quite a few people. A person who is asked to leave a home or place of business by the owner or person lawfully in control of those premises and who does not go becomes a trespasser and violates the law.”

Further, in defining the First Amendment the American Library Association states: “The First Amendment to the United States Constitution protects speech no matter how offensive its content. To be clear, the First Amendment does not protect behavior that crosses the line into targeted harassment or threats, or that creates a pervasively hostile environment. But merely offensive or bigoted speech does not rise to that level, and determining when conduct crosses that line is a legal question that requires examination on a case-by-case basis.”

By calling the local police and waiting for them to escort the offending individual from the premises, the City Limits staff and owners avoided a confrontation, and as they said on their Facebook page, “there is no way to fully prepare for a specific situation like this; the matter was handled as cautiously and swiftly as was practical at the time.”

Millie Jasper, Executive Director of the White Plains-based Holocaust & Human Rights Education Center, said in an interview Sunday that, “when someone wears a swastika, they are putting it out there for everyone to see they are identifying with Nazi ideology.”

Jasper said that while the man said nothing, spoke to no one in the restaurant other than to order food, his intent was clear.

Having borne witness to several acts of antiSemitism over recent weeks, including at area high schools, Jasper said,  “At the Holocaust & Human Rights Education Center, we want to engage in conversation about the evolution of hate and where these ideas and statements about ourselves come from,” indicating that minds can be changed with education.

In March the Center will hold an annual meeting at Iona College with over 600 high school students from 45 schools in Westchester County to address this issue. “You would be surprised how many high school students are on the fence,” Jasper said. “There is a lot of peer pressure out there.”