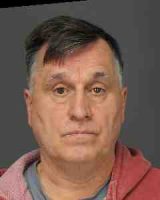 On April 15, 2019, Manich engaged in online communications with an undercover investigator in which he spoke about having sex with a child. At that time, he also sent pornographic images of a child to the investigator, believing he was communicating with someone who could procure him a child for sex.

In a second incident, May 3, 2019, Manich was found to be in possession of images of a child under 16 years old in a state of undress.

Manich was arrested by District Attorney’s Office Criminal Investigators May 3, 2019 and arraigned later the same day.