Arts & Entertainment Education The Putnam Examiner
May 6, 2022May 9, 2022 Examiner Media Mahopac High School
We are part of The Trust Project

The theater kids at Mahopac High School had a lot to juggle this year. In addition to their regular, demanding schoolwork, they had to manage a highly-condensed theater season that involved presenting two plays since Christmas break.

“This year has felt like one long season,” said Drama Director Christopher Purr, an English teacher. “We did the fall play and immediately jumped right into the spring musical. There were lots of challenges, but the students rose to the occasion.”

The fall drama, “Clue,” had been presented in mid-January instead of November because of construction in the high school. As soon as that play wrapped, the drama club was back at it again, working on the spring musical.

“It is pretty much the same cast of students, so it was asking a lot,” Purr said. “The kids show so much commitment. Almost every student chose to stay on board for the spring musical.”

To make matters more complicated, the “Spelling Bee” show was a big production that required a large stage and technical crew.  In addition to learning their lines, the dozens of student actors had to also learn the songs.

As she has for every play for years, English teacher Sonya Velez rallied the actors and served as Assistant Drama Director. 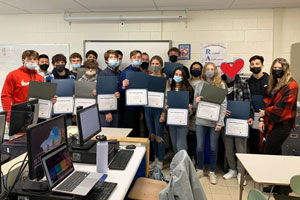 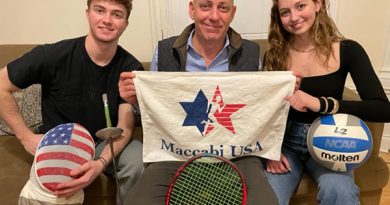 Multiple Generations to Compete at Maccabiah Games in Israel