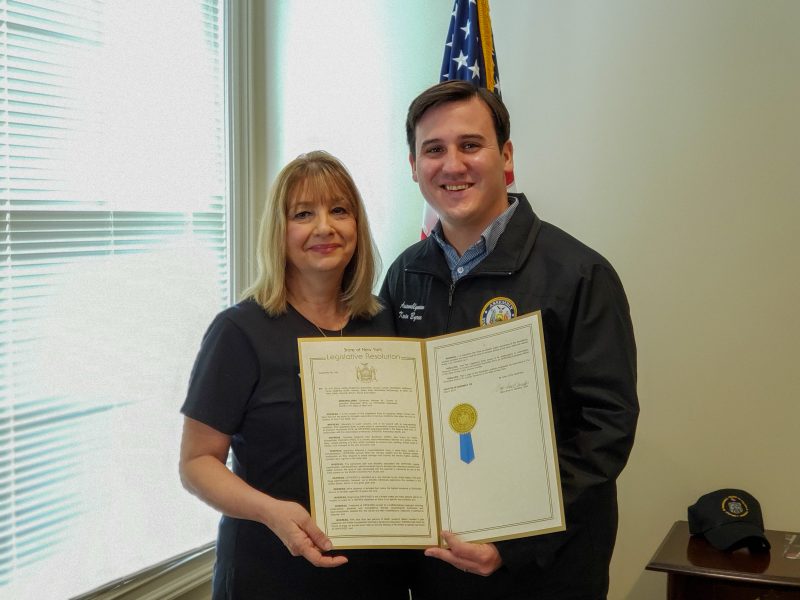 CRPS is a rare disease characterized by acute pain, swelling and tenderness of a limb, and in extreme cases can result in loss of mobile use of a limb. With fewer than 200,000 cases in the U.S. yearly, there is limited research and awareness about CRPS/RSD.

Byrne’s resolution declared November 2019 as CRPS/RSD awareness month in New York State. The resolution had strong bipartisan support and was adopted by the Assembly on May 6.

Each year, the Reflex Sympathetic Dystrophy Syndrome Association dedicates the first Monday of November as “Color the World Orange Day” to raise awareness for the condition.

“During this past legislative session, I was approached by a friend of Ms. DeMasi Chaluisan, who explained what Marianne was forced to endure on a regular basis,” said Byrne. “After asking what our office could do to help, I was happy to introduce and pass this resolution by working with colleagues on both sides of the aisle to raise greater public awareness in our state about CRPS/RSD and those who suffer from it.”

Chaluisan thanked Byrne for his advocacy for people who are dealing with this debilitating disease.

“CRPS/RSD is still not well known publicly and we need further medical research to improve treatment and find a cure,” she said. “It’s an invisible condition. People on the outside cannot see the pain that people suffering from CRPS/RSD live through on the inside. By introducing a resolution and gaining support from his Assembly colleagues, Assemblyman Byrne is helping move our awareness campaign forward.”