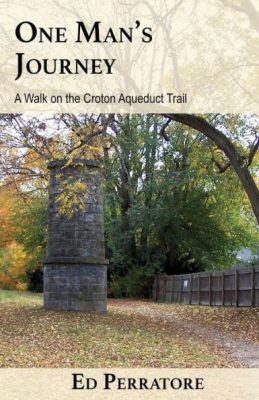 In his book “One Man’s Journey: A Walk on the Croton Aqueduct Trail,” more than three decade Mount Kisco resident Ed Perratore invites you to accompany him on his frequent long walks.

Throughout the book, Perratore skillfully immerses readers in the local natural environment. But perhaps even more important, is his description of the mental element of detaching from the world by trail walking.

Perratore dealt with heavy challenges such as his father’s cancer diagnosis, and the doctor visits which followed, insecurity in the workplace and a series of difficult situations in his personal life.

To help him handle his emotions, he would commit the time to walking the trail, generally amidst a busy day of work as a writer. It wasn’t so much to detach from the world, but rather to connect in a meaningful way, establishing a healthier mindset in the process.

“Imagine…that whatever happens to be troubling you on a given day…were physical objects filling a jar representing the mind,” writes Perratore. “Standing before anything representing a great achievement, natural or man-made, can have a way of enlarging that jar.”

This comparison encompasses his core message: our happiness and general worldviews are composed of our mindset. He acknowledges the obstacles and makes them appear smaller, yet avoids minimizing them.

Many themes of struggle detailed in the book are universal. The concept of an unwelcome, negative thought occupying one’s mind is all too common. Perratore’s long walks have allowed him to uncover considerable insight into his own ability to develop and maintain resilience and optimism.

Although he initially viewed his walks as a respite from life’s day-to-day stresses, the story of the revelations he made along the way eventually took the form of a descriptive book, containing a degree of imagery and relatability that enables the feeling of immediacy that would be brought about by a walk alongside him on the Croton Aqueduct Trail.

“There’s something in it that everyone could appreciate,” Perratore said.

In order to construct this sense of attachment, the author employed an intriguing method.

“I had…a digital audio recorder that I brought with me and I would just be walking along chatting into it,” he said.

Having the recorder available allowed him to pick up on noteworthy details, which may have otherwise been overlooked or forgotten. His recorded commentary related to both his thoughts and surroundings so the reader is able to take a glimpse at both.

“It has helped me to be a happier person,” Perratore reflected of his peaceful journeys.

To all those who have walked along a trail before, ‘One Man’s Journey’ may provide new insight into the joys and the deeper understanding someone can make about their surroundings and themselves. The images are present along any woodsy destination, and the messages apply to all.

“One Man’s Journey: A Walk on the Croton Aqueduct Trail” can be purchased on Amazon and www.BarnesandNoble.com, and at various local bookstores and their websites.