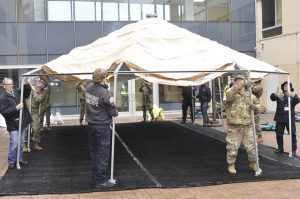 The National Guard set up a tent outside NewYork-Presbyterian Hudson Valley in Cortlandt in preparation for a potential surge of patients associated with the coronavirus outbreak.

Representatives from three local hospitals expressed confidence last week that their facilities will be able to handle the anticipated spike in COVID-19 cases forecast to be diagnosed throughout the metropolitan area.

Northern Westchester Hospital in Mount Kisco and Phelps Hospital in Sleepy Hollow reported being well-equipped at the moment, in part because they are part of Northwell Health’s 23-hospital system which can draw on a staff of about 73,000.

“We monitor volume throughout the day and night, and as changes occur, the hospital is well positioned to open capacity and redeploy resources to provide the best care for our patients,” said Derek Anderson, executive director at Northern Westchester Hospital “This often requires looking at non-traditional hospital beds, like recovery units as safe locations to care for patients.”

Northern Westchester currently has 245 beds, with 15 dedicated to intensive care.

Meanwhile, Phelps reported that should a surge occur the Northwell Health system has access to multiple sources of ventilators, having been able to increase its number by about 50 percent throughout the system. There are also about one million N-95 masks that have been secured for distribution.

About two months ago, Northwell also spent more than $5 million to bolster its lab equipment and supplies, including masks, gloves, goggles, gowns and other personal protective equipment, according to Interim Executive Director Eileen Egan.

Phelps has plans in place to handle a surge in patient volume, having developed and refined emergency response plans dating back to the SARS outbreak in 2003, the swine flu outbreak in 2009 and Ebola in 2014.

At Putnam Hospital Center in Carmel, administrators said they are fully equipped to handle the growing number of COVID-19 cases. Hospital President Peter Kelly said there are ample supplies, staffing and beds, including ICU capacity.

“One of the many benefits of being part of a health system with seven hospitals is we can work together to help balance and accommodate a shifting census if we see an influx in patients,” said Kelly.

However, Kelly said the hospital’s staff is mindful that with COVID-19 the number of afflicted patients can multiple quickly. Cases throughout the Unites States are increasing daily, and in Putnam County the number of lab-confirmed cases went from zero to nearly 40 in about week, he said.

Anderson said that Northern Westchester began preparing for COVID-19 in early February by activating its emergency command structure. The hospital is now running emergency operations around the clock. There were surge planning and drills and regional exercises with Phelps.

“Northwell Health has been gearing up for this pandemic since news of the coronavirus first emerged out of Wuhan, China,” Anderson said. “Northwell’s emergency operations center has been activated since January, and over the past seven weeks, Northwell has spent millions of dollars purchasing lab supplies, gloves, gowns, masks, eye protection and other material in preparation for COVID-19.”

The hospitals have also amended their visitation schedules. In Putnam, all support groups have been The Northwell facilities have suspended visitation except for end-of-life situations, pediatrics and NICU and the maternity and emergency departments. Elective surgeries were discontinued on Mar. 16 for at least a month, which freed up bed capacity.

Staff has also emphasized to the public social distancing, proper hygiene and listening to medical advice during the current health emergency.

“Rest assured, we are preparing aggressively to meet this challenge and care for you, our community, if we are faced with a surge of COVID-19 patients,” Egan said.

Holly Crocco contributed to this article.