Looking for an engagement ring, a brooch, earrings, bracelets, beaded necklaces or some antique jewelry? You’re in luck. Limited Unlimited Jewelers, located on Mount Kisco’s Moger Avenue, has a wide selection of all those items and more.

Even though the store has been a mainstay in Mount Kisco since 1969, for the past 19 years Bridget Krowe has been at the helm, running a business that was once operated by her brother, Tom Carlaw. When he died suddenly in 1993, Krowe took over and has been steadily adding products to this eclectic store. 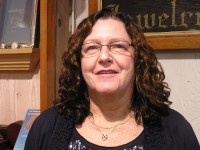 Krowe, a Chappaqua native, admits to always having a fascination with crafts, teaching herself how to make different kinds of jewelry when she was a young girl, a skill she later passed on to her brother. Her parents were artistic, too. Her mother dabbled in ceramics, quilting and folk art, and her father, an advertising executive, made wood and clay sculptures in his spare time.

With a proliferation of jewelry stores all across our region, including chains that take up space in several local malls, there’s the chance that Krowe might be disquieted by the competition. But that’s not the case. In fact, she has deliberately set out to establish Limited Unlimited as something different.

“While we sell everything and provide services similar to a regular jeweler,” said Krowe, “we’re not your average jewelry store either.”

The difference can be seen in the many unusual items. For example, you won’t find the rare gemstone, alexandrite, in many other jewelry stores, said Krowe. The stone, named after the Russian czar, Alexander II, is rarely used in modern jewelry, but its ability to change color, from a bluish-green in daylight to a shade of raspberry in incandescent light, makes this stone very rare, she explained.

An entire section is devoted to antique jewelry once popular with the upper class in the 18th and 19th centuries, such as items attached to pocket watches as well as lockets and charms of all kinds. Then there are the cufflinks made from the innards of a watch, material used in the seats of the old Yankee Stadium, now part of another cufflink set, and charms containing Monopoly pieces and letters from Scrabble, both items sanctioned by Hasbro, the maker of the games.

Throughout the store, whose loyal customers come from throughout the area and include the odd celebrity, one can’t help but notice Krowe’s affinity for tiny objects. Display cases are full of small items that she’s either collected herself or customers have given to her.

They come from all parts of the world and include the miniature silver tea set from a trip to Harrods in London, the tiny bottles of Scotch whiskey from Scotland, the cute violin box a customer gave to her as a gift and the miniature bicycle made from a can that originated in South Africa.

While Krowe has cut down on her work schedule as of late (for years she was in the store six days a week), her passion for jewelry never wanes.

“I just love it,” she said. “It’s a bit like a treasure hunt for me as I try to figure out its age and the history behind it.”

Most of all, Krowe is happy to be part of a business that brings joy to so many.

“Whether my customers are celebrating an engagement, a wedding, a birthday, the birth of a child or an anniversary, it’s nice to be part of those happy occasions.”

Limited Unlimited Jewelers is located at 8A S. Moger Ave. in Mount Kisco and is open Monday through Saturday 10 a.m. to 5:30 p.m. For more information, call 914-241-2232 or visit www.limited-unlimited.com.