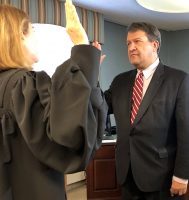 County Executive George Latimer was sworn into office on Monday, vowing to create a more transparent and renewed government throughout his term.

Moments after Latimer was sworn in by Supreme Court Justice Gretchen Walsh in White Plains, he announced that he would be sending a formal request to New York State Comptroller Thomas DiNapoli to perform a full and open fiscal review of the county’s policies and procedures.

In September, former County Executive Rob Astorino came under fire after DiNapoli released a report stating that Westchester was a fiscally stressed county.

“Whatever decisions we have to make going forward, we make them openly, transparently, and we make them together as a group of people trying to deal with our issues,” Latimer said.

Latimer added that privatization of the Westchester County Airport is a high priority economic issue he’ll be delving into during his administration.

Latimer signed an Executive Order that will remove the names and likeness of any elected official from any county owned facility, along with all directional, informational and promotional signs. He said the only exception would be the office building where that official is based.

“All of these facilities are owned by the people of Westchester. Their effort, their tax dollars, their faith have put these things into place,” Latimer said. “It is not the possession of any one County Executive over any period of time.”

An Executive Order was also signed that will better involve municipalities in decisions that impact their community. Under the Good Neighbor policy, the county would be required to make a formal presentation at the designated city, town or village board meeting whenever they have a major action or change to make. The municipality would be given 60 days to gather information and allow for a public form before submitting their support, neutrality, or opposition to the county.

Latimer will also form a task force aimed at revisiting shared-services within the county, stating how government officials need to be more proactive in delivering services to all residents in the most cost-effective manner.

A social media campaign entitled, #MyWestchester will also be launched, encouraging residents to share images, videos, and anecdotes about what makes Westchester special. Latimer said this will maintain the county’s positive profile.

“Westchester is home to so many wonderful people, businesses, parks, waterways and a whole host of other things that make it such an ideal destination for folks to live, work, visit and raise a family here,” Latimer said. “This is a way to show our pride. Westchester is a special place and we are eager to show it off.”

Latimer said he is enthusiastic about his upcoming term and intends on being very active and open within the community. Over the next two weeks, the Democrat will be announcing his two-week “Tour of Change” campaign, where he will be making announcements on issues throughout the county.

“The people of Westchester County are uniquely successful, uniquely talented in so many different fields,” Latimer said. “And we need to bring that talent that resides outside these windows into the decision making process of government.”