Skip to content
The White Plains Examiner
January 2, 2018January 3, 2018 Anna Young
We are part of The Trust Project

Despite a record-breaking turnout at last year’s knife and firearm show at the County Center in White Plains, Latimer cited a national rise in gun violence, stating that he doesn’t want gun culture glorified on county property.

“This venue, which was created decades ago, is a showplace for family entertainment and for family programs and services,” Latimer said at the Jan 2. press conference at the County Center. “This center has always been a place for those types of family values.”

Following intense debate last January after former County Executive Rob Astorino scheduled the Northeast Gun Show at the County Center, the Board of Legislators, in a straight partisan vote, approved legislation that would’ve banned gun shows on county property by a 9-8 margin.

But days before the scheduled show, Astorino vetoed legislation without any time for an override vote, stating that he was protecting First and Second Amendment rights.

From 1999 to 2010, the county discontinued gun shows. But Astorino lifted the ban after taking office and one was held at the County Center in 2012. However, after the Sandy Hook Elementary School tragedy, a 2013 show was canceled and a handshake agreement was made among county officials that the venue would no longer host the shows.

Latimer recognized that some may not agree with his decision, but feels strongly that the county center is the wrong venue to host a gun show.

“Westchester County government should not be in the business of advancing the sale of weapons and other items often sold at gun show—plain and simple,” Latimer said. “This is not a restriction on gun shows in the entire county, but rather just on public land.”

A push was made by members of the Democratic Caucus to override Astorino’s veto following the mass shooting in Las Vegas that killed 59 people and injured more than 500 last October. The action was denied.

Latimer also condemned the sale of Nazi and confederate memorabilia that was sighted at last year’s show, stating that there’s no use for it in society.

Members of the Democratic Caucus were also in attendance supporting Latimer, stating that they would work to make his Executive Order an official law.

“This is a great first start to our new year,” Majority Leader Catherine Borgia (D-Ossining) said. “It’s not appropriate for the government to make money selling weapons to its citizenry.”

“Gun culture does not belong in Westchester County and certainly not in our municipal buildings,” Legislator Catherine Parker (D- Rye) asserted.

Legislator Maryjane Shimsky (D-Hastings-on-Hudson) said this would be the first of many cooperative efforts in creating the kind of government the people of Westchester want, expect and need to thrive and move forward constructively.

“We’re going to listen as best as we can to the voices of the people, we won’t always do things that everybody likes, but we will try to always engage so people understand that this is their government at the end of the day,” Latimer said. “We’ve got a long way to go, this obviously is just one decision on a path of decisions.” 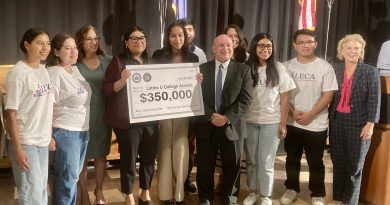