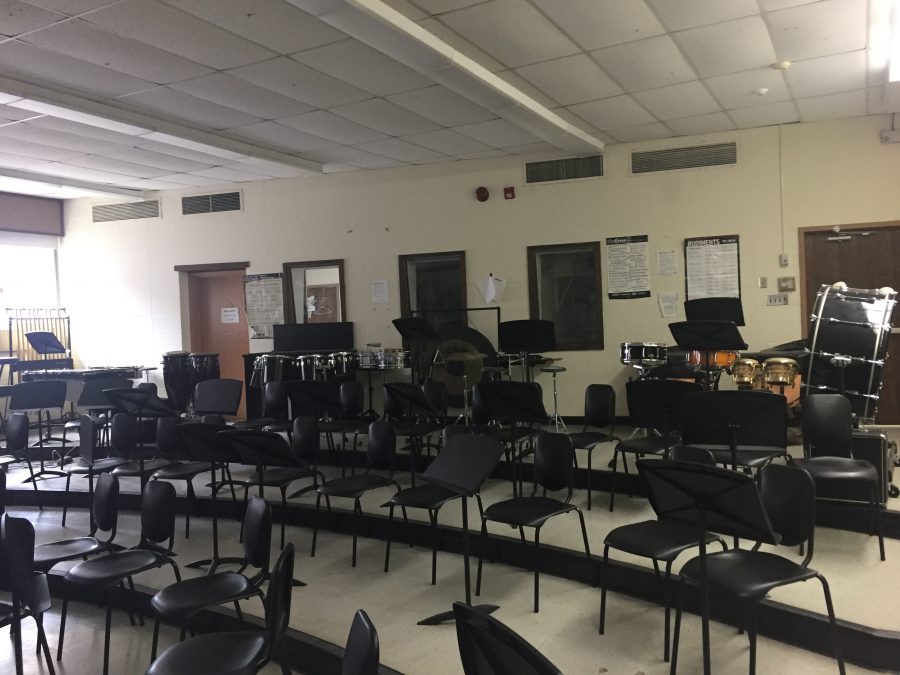 Looking back 15 years ago, Mahopac Superintendent of Schools Anthony DiCarlo said the school’s athletic facilities used to be the envy of the region. They aren’t anymore, he observed.

Classrooms for arts and science are so old, DiCarlo said they are in dire need of improvements. District libraries are far behind other school systems in the region, he pointed out.

And with that in mind, the Mahopac school district will be offering a large- scale bond referendum to voters next Tuesday along with the annual budget vote. The bond would cost $53.9 million, though the district has contended it would be a “tax-neutral” plan. The bond package would include upgrades to science and music and performing arts spaces, security enhancements, conversion to multi-media centers and changes to athletic fields and facilities.

During a recent tour of the high school and middle school, DiCarlo and assistant superintendent for business Harvey Sotland explained why the upgrades are needed. DiCarlo was firm that every item included in the bond is a need, not just a want.

“There to me is nothing that is a want,” DiCarlo said during a recent tour with The Putnam Examiner. “Everything we’ve showed you is a lot of health and safety, a lot of is what we owe our students.”

DiCarlo said the grass field used for school team practices and by the Mahopac Sports Association at night and over the weekend has been an issue for a “very, very long time.”

When it rains, the field remains non-functional once the bad weather is gone because of poor field conditions.

If the field is turned into a turf, then every high school team can remain at the high school campus rather than going to other fields in town.

In the high school, music rooms would see improvements for orchestra, band and chorus with an arts wing that would allow for better acoustics and a larger space to play in. Music teachers in the district will be working with architects to ensure the rooms would be user friendly, DiCarlo said.

High school science rooms and the library would see upgrades that would turn them into 21st century spaces where more technology is included. There will be a new configuration in the high school where three separate rooms will be blown out and become the school’s STEAM (science, technology, engineering, art and math) center.

With a need for engineering and computer science jobs in the workforce, DiCarlo said it is imperative to introduce these programs to students as early as possible.

In the middle school, the entrance and driveway will be redone after years of patchwork. Other classrooms will also be repurposed, including changing the planetarium to a mini theater.

At every school, the district wants to put in place a security vestibule that is similar to the one at the middle school and every building will have a kiosk where staff will need to swipe a card to enter.

The bond would improve the quality of water and water pressure for the high school, middle school, Falls academy school and bus garage. Sotland said each of the four properties has their own water system, which are all old. The fix would result in centralizing all the water into one plant located off the high school campus that would hopefully alleviate the constant repairs to the system while enhancing the water quality.

“The big thing about this bond is every single school is affected by it,” DiCarlo said.

The district has repeated ad nauseam that the bond would be “tax-neutral.” Sotland said because there is existing debt that will be paid off between 2019-22, the new bond would take the place of the old debt.

Sotland conceded taxes could go down if the proposed bond fails, but because of the tax cap calculations the district would need to cut between $500,000 and $900,000 from the annual budget because that old debt would not support the tax levy the district has had.

DiCarlo also noted that items in the bond package would need to be addressed at some point whether voters approve the referendum or not. District officials don’t want to include capital projects in the annual budget because it could take away from other programs.

An approved referendum will also result in New York State aid around $28 million.

Assuming the referendum passes, the goal is to get the projects complete over the next two to three years, DiCarlo said.

With the vote coming up, DiCarlo, who has been in charge for a year, believes the district has taken every step the right way. Mahopac received input from teachers, building principals, parents, students and other community members. A survey sent out to the community got more than 600 results back, DiCarlo noted.

There have been several informational forums and the school website takes a deep dive into everything the district would do if the bond is approved, including a video tour. Now, voters will have the final say.

“I think everybody has an understanding of what it’s about and then a decision will be made by the public whether we proceed forward or not,” DiCarlo said.