After a regular season filled with drama, the hot Westchester sun provided a toasty backdrop for the first round of the Lakeland Summer League Playoffs. Here’s a look at the regular season standings with a refresher on the playoff format.

The playoff format is pretty simple, every team makes the playoffs, single elimination, and teams are matched with the inverse finisher in the other league. (1st place in A plays 8th place in B, 3rd place in B plays 6th place in A, etc…)

On Sunday, the playoffs began, and in the night cap, Rye and Byram Hills played a thriller. Neither team scored through regulation, with Will Harrison of Byram Hills and Kyan Cox of Rye trading saves. After a long 50 minutes in the late night, the Garnets were able to advance past Byram Hills on penalties, 3-1. They will play the winner of JJEF and Westlake on Friday at 5:00 PM.

Somers had a dominant regular season, finishing with 6 wins of 8 games, and scoring a League A-leading 18 goals. Their playoff matchup with Panas yielded a similar result, an assault of shots on goal, and a victory. Liam Healy, Chris Goncalves, and Edmond Cleary all beat Johan Essau for goals. Essau did hold up his end of the stick, stopping seven shots, but his offense couldn’t pick him up. A goal from Alex Guevara was the only scoring they’d muster, and Somers would win 3-1. Somers will face the winner of Briarcliff/Harrison on Friday at 7:00 PM

After finishing 6th in League B, Carmel had something to prove, and they went out and did just that. Eastchester didn’t have enough answers for Carmel’s attack, as they pounded in three goals. Kevin Hernandez, Neil Walia, and Kyle Klammer did the job for the Rams as they defeated the 3rd-seeded Eagles 3-1. Carmel faces the winner of Yorktown/JJCR on Friday at 6:00 PM.

The early game was perhaps the most captivating of the day. Lakeland, the dominant force that had allowed just one goal all summer, was facing Putnam Valley, a team that had mustered just one goal as they suffered eight defeats in League B. It was a stereotypical David vs Goliath matchup, and it started out just that way, with David Rodriguez scoring an early goal for Lakeland that put them ahead.

Lakeland consistently applied pressure to the thin Putnam Valley squad. Not only were the Tigers overmatched physically and technically, but they had just one sub, and had eighth graders playing, while Lakeland had more than enough subs to keep their players at least marginally fresh in the 90+ degree heat.

Putnam Valley didn’t need fresh legs to be motivated however, even when Silvio Ahmataj put the Hornets up 2-0 by finishing a rebound after an impressive save, PV kept the chip on their shoulder. Shot after shot poured in on net, but Putnam Valley’s Miguel Hernandez was equal to the task 10 times, and it felt like significantly more. Hernandez is, according to Putnam Valley’s coaching staff, “the one player that we cannot live without,” and he proved it today.

Esuar Ordonez was able to get one back for Putnam Valley, just the second goal they’d scored all summer, and the second goal Lakeland surrendered. In the end, it wouldn’t be enough, as a free kick to tie the game at the death steered just wide of the net, and Lakeland came away with the victory, 2-1.

The better team did win this game, and while Putnam Valley fought hard, Lakeland was fighting too. The Hornets always seemed to be in good positioning, which limited chances off of clearances for Putnam Valley.

Lakeland will play the winner of White Plains/RCK on Friday night at 8:00 PM 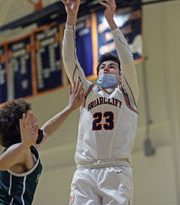