One aspect has been a constant for Mahopac High in establishing itself among the Section 1 elite in recent years – a Klammer sister has been an impact player for the Indians.

Katrina set the standard for the sisters. She was joined by younger sister Mia. When Katrina graduated, Mia welcomed youngest sister and current senior captain Piper to varsity. The sisters have all been Mahopac captains as seniors.

While Piper is a major factor in Mahopac’s successful season and assured berth in the Section 1 Class A Girls’ Soccer Championship, Katrina and Mia are starters and captains at Cortland and The College of Saint Rose, respectively.

Katrina also established the sisters’ love of the sport when they were younger.

“Our dad started us off playing soccer at a young age and I would definitely say that once Katrina started playing, that Mia and I as younger siblings wanted to follow in her footsteps,” Piper said.

Prior to teaming up for Mahopac, Piper explained she was able to watch, play against and even play with her sisters and cousin on the same club team.

“This has helped me to become the player that I am today because we have always pushed each other to be the best, well-rounded players that we can be whether that was in foot skills, aggressiveness, or sportsmanship,” Piper said.

Even with her sisters’ busy academic and game schedules, Piper knows they are pulling for her and the team.

“My sisters try their best to watch all of my games and always support me and the team, but sometimes have to miss them due to their own games and practices,” Piper said.

Mahopac closed out its season with a 3-0 victory over rival Carmel to finish 11-5. The Indians received goals from Gianna Fava, Cam Wilson and Keyla Tenenpaguay. Klammer had an assist as did Fiona Kelleher.

“Going into sectionals the defense has been playing strong, giving up maybe 10 goals in 16 games,” Piper said. “We hope to keep up the strong defense in sectionals and hopefully that can help us to make a long run.”

SOMERS only had one loss entering the last full week of the regular season and the Tuskers were aware they would have a chance to return the favor to Yorktown.

The Tuskers did just that, avenging the lone blemish on their record with a 5-0 victory over Yorktown behind two goals and an assist from sophomore Tiana Righetti.

Coupled with a 2-1 win over Clarkstown North, Somers finished the regular season 15-1. The Tuskers have a great chance at earning the No. 1 seed in the upcoming Section 1 Class A Girls’ Soccer Championship.

“We made the necessary adjustments for the game,” said senior and captain Tori Olsen. “Going into it we knew we wanted to win the game and we did everything it took to achieve this goal.”

Somers trailed Clarkstown North, 1-0 at halftime, but second-half goals by Righetti and Arbelaez fueled the victory. Ava Giudice assisted on both goals.

“After trailing 1-0 at halftime, we were able to regroup and talk about how to break down their formation,” Somers’ Coach Kelci Hegg said. “We came out better organized, we were able to capitalize on our chances and control the pace of the game.”

Somers now begins its preparation to confront the difficult path to a Class A sectional title. Annually, Class A is the most difficult to win because of the large number of excellent teams such as Yorktown, Lakeland, Hen Hud, Pearl River, Albertus Magnus, Tappan Zee and Somers, just to name a few.

“I think Class A is always so challenging because of every team’s competitiveness, work ethic and great talent,” Olsen said. “Everyone is out to win and this pushes our team to work even harder and go the extra mile, all while having fun, so we can succeed.”

HEN HUD concluded the regular season with a draw, in double overtime, and record-setting performances in a victory.

The Sailors played Tappan Zee to a 1-1 draw in a rematch of a 2021 Section 1 Class A Girls’ Soccer Championship outbracket game which the Dutchies won in penalty kicks.

“It was a great 0-0 overtime game last year,” Hen Hud Coach Bill Pagel said. “When we saw them on the schedule this year we were eager to play them again. This turned out to be another really well-played game by both teams. This game, we had some good chances in overtime, but just missed the target. We were pleased to walk away with a tie against a quality team. This game proved to be a confidence-booster for us to end the regular season with. Heading into sectionals we are feeling confident in our ability.”

The Johnsen sisters will now have their names in the Hen Hud girls’ soccer program history books after Lena had four goals and two assists in the 7-0 win over Peekskill. Liv added two goals and three assists.

Lena Johnsen tied the program’s single-season goals standard with 27. Liv Johnsen established a new program record for most goals scored in one season by a sophomore with 20.

Jess Redmond opened the scoring for Hen Hud and Morgan Parks had an assist.

Hen Hud finished the regular season with a 10-4-2 record and will begin play in the Section 1 Class A Girls’ Soccer Championship this week.

LAKELAND closed out its week with an accomplishment it can add to the girls’ soccer banner in the Hornets’ gymnasium.

The Hornets defeated district-rival Panas, 5-2, and earned a share of the league title. Lakeland Coach Shawn Sullivan noted this is Lakeland’s first league title since 2004.

Riley McConnell and Laura MacDonald each had a goal and an assist. Deanna Lage, Kayleigh Mula and Ellen Ndreka also had goals.

“We are all super-thrilled and proud of ourselves for being able to finally win a league title,” senior and captain Deanna Lage said. “Throughout the season we’ve all been working super hard to get better every game and this really did show in big games. Beating our rival, Panas, on our senior night to secure this title more exciting and exhilarating. It’s been a goal of the entire team to win league and to make it real was awesome!”

Lakeland lost a tough 3-2 game, in double overtime, to Eastchester earlier in the week.

“We did an outstanding job defending, moving the ball and creating chances, unfortunately we couldn’t find the back of the net with many of our shots,” Sullivan said. “We are headed in the right direction going into sectionals. We just need to convert a few more chances.”

PANAS concluded the regular season splitting two games to finish at 8-8 as it prepares for sectionals. The Panthers reached .500 with a 6-0 victory over Putnam Valley in their final regular-season game.

Giuliana Rodriguez and Cassidy Pisani each had two goals and Rodriguez tallied two assists. Molly Muller added her team-leading ninth goal of the season along with an assist and Kaitlyn MacPherson scored a goal. Kaylie Mellars and Emily Jankowski also had assists.

“I was happy with our team’s effort in their win, especially after an emotional rivalry loss the night before,” Panas Coach Matt Schiff said. “We possessed the ball well, created opportunities and put heavy pressure on their midfielders. It’s a good result to have leading into sectionals.”

Muller and MacPherson had the goals against Lakeland. Muller assisted MacPherson and Jankowski assisted Muller. Kelly McAleese made 13 saves.

PLEASANTVILLE rallied in the second half to force overtime and Jess Beck punctuated the 3-2 victory over VALHALLA scoring the game-winning goal by Jess Beck with 29 seconds remaining in the second overtime.

The Panthers trailed 2-1 in the second half, but Faith Brown scored the second of her two goals to even the score.

After dropping a 7-0 verdict to Hen Hud, Peekskill bounced back to beat Woodlands, 7-0.

WHITE PLAINS swept its two games – 3-1 over Fox Lane and 3-0 over Port Chester.

The Port Chester game was halted early in the second half because of thunderstorms.

“I was proud of my girls for sealing the deal in the first half so that if the weather didn’t hold up, we would get the win after half,” White Plains’ Coach Ali Rainone said. “The last time we played them we didn’t score anything until the 70th minute so it was nice to come out strong, right away.”

Francesca DeLia, Kim Orozco and Sophie Mercer scored for the Tigers and Cianna Smith had an assist.

HORACE GREELEY had a busy final week of the regular season with four wins and it outscored its opponents, 29-1.

After Fox Lane took a quick 1-0 lead on a Melissa Palma goal, assisted by Joselyn Wierzzhowski, the Quakers scored the next seven goals.

Hannah Fetzer had a hat trick, Feiner added two goals and two assists and Ramsey Edson finished with a goal and three assists.

Edson and Feiner each scored three goals in the victory over Arlington B and Fetzer posted two assists.

Greeley (12-4) had balanced scoring in the 8-0 triumph over Saunders as seven different players scored, highlighted by Feiner’s two goals.

Ella Salstein and Abi Rondeau had two goals apiece against Westlake and Amelia Dougherty added one goal and two assists for the Bobcats (9-5-2).

Sydni Shamus and Dougherty scored in the 2-0 win as the game was stopped at halftime because of severe weather.

Rondeau added two more goals in the 5-3 win over Ardsley.

Following losses to White Plains (3-1) and archrival Horace Greeley (7-1), FOX LANE closed its week with a 5-0 win over Saunders.

Sophia Bueti finished with one goal and two assists against Saunders and Melissa Palma added one goal and one assist.

PUTNAM VALLEY played its final four games of the season and, unfortunately, lost all of them – Dobbs Ferry, Pawling, Panas and North Salem.

“GiGi, a senior and captain, has been an integral force to be reckoned with each and every game,” Putnam Valley coach Nicle Ryan said. “Our other three captains, Emily Nielsen (also a senior), Taylor Rogers (junior), and Mia Borchick (sophomore) have been major assets in all roles on the field. All four captains are prime examples of positive leadership.

“While our record does not show much success, it is in no way an accurate reflection of the progress achieved this season on both the individual and team levels. This truly is a great group of girls and I look forward to next season and all those returning. We will for sure miss our five seniors.”

WESTLAKE lost its only game of the week – 3-1 to Blind Brook.

YORKTOWN closed out the regular season with a pair of losses – 5-0 to Somers and 2-0 to John Jay-Cross River.

Goalie Ciara O’Brien made 18 and 17 saves, respectively, in the two games as Yorktown finished the regular season at 11-4-1. 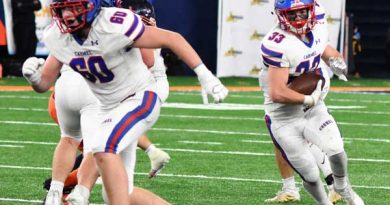 Greeley Falls a Game Shy of the County Center