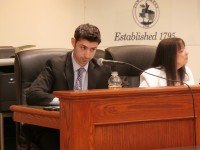 A public hearing focused on term limits for Town of Kent board members was opened Tuesday that could lead to a vote referendum come November.

Pushed by Kent Councilman Paul Denbaum, who ran on a platform that included fighting for terms limits, the proposed law would limit the four councilmembers to two straight four-year terms and the town supervisor four straight two-year terms. Only the law making body of elected officials would be prohibited from serving more than eight years. The proposed law would not affect the receiver of taxes, the town clerk, and highway superintendent.

Denbaum said in an interview the point of the term limit would encourage “fresh faces” to join the political scene and decision making process within the town, while quashing any possible corruption or complacency from town lawmakers that are on the board for more than eight years.

When campaigning and talking with residents about terms limits, Denbaum said the idea received bipartisanship support.

“I got positive results on that promise from Republicans, Democrats, Independents,” Denbaum noted.

But not everyone on the board is as thrilled over the possibility of limiting the time a resident can serve on the board. In an interview, Councilwoman Penny Ann Osborn said while term limits are useful for state or national lawmakers, she doesn’t believe they are necessary at the town level.

“I think we already have term limits,” she said. “They’re called voters.”

Osborne said if voters are content with the job a board member is doing, they should be allowed to make the decision who stays and who goes. An example of that was this past election, Osborne said, when former board member Lou Tartaro was voted out and former supervisor Cathy Doherty was also booted by large margins, where voters had the final say.

Responding to the assertion voters should decide how long a board member stays in office, Denbaum said there are already a set of laws that dictate if a person can run for office, like being a certain age or being a resident of the town. He said the term limit would simply be another restriction. He also said some people even refuse to get into the political arena because they might have the daunting task of facing an entrenched incumbent that has more campaign money and name recognition.

Supervisor Maureen Fleming said she hasn’t made up her mind yet on the proposed law because she sees arguments for both sides. While she said no local official should become too entrenched and comfortable in office, people with good ideas that are doing good work shouldn’t be forced out by a law.

Once the public hearing is closed, the board will vote on whether to send the proposed law to the Town of Kent voters in as part of a referendum in the general election. Denbaum believes he has the votes on the town board to get it the November election. Fleming said she would vote to at least put it on the ballot, though she’s unsure which way she’ll vote in the voter’s booth.

When the board voted to move the proposed law to the public hearing, it passed 3-1 with one abstention from Osborne. Fleming, Denbaum, and Councilman Bill Huestis voted in favor of it and Councilman Michael Tierney voted against it.

Written comments will also be accepted.