Nestor Garcia had a goal and was determined to accomplish it.

A member of Yorktown Boy Scout Troop 267, Garcia wanted to build something meaningful for the community. But he knew he couldn’t do it alone.

Enter: Putnam Northern Westchester BOCES. Garcia approached the agency about the possibility of creating a hiking trail on its 226-acre campus.

Last week, the resulting trail was unveiled with a ribbon cutting ceremony attended by Garcia, his parents, Bruni and Nestor; his mentors, Jane and Walt Daniels; BOCES Board members; and agency leadership.

District Superintendent Dr. James M. Ryan praised Garcia for taking the initiative to launch the trail project and for seeing it through to completion. “I want to recognize the special partnership between BOCES and the community and Boy Scouts, and especially this Eagle Scout who stepped forward” to make it happen, Ryan said.

Daniel Novak, coordinator of the Center for Environmental Education at BOCES, said “from months of work, Nestor learned how to work with a large agency, obtain insurance and work through important bureaucratic steps, and he did it with patience and excellent communication while keeping us all in the loop.”

Completed this summer, the trail, which is almost three quarters of a mile, provides an easily walked loop through the southern portion of the campus, and connects the south and north campuses through the woods. To make it usable, Garcia cleared vegetation, leveled steep sections and built stream crossings. He also added trail markers. CTE students, including those in the urban forestry program, also assisted in the clearing.

Once completed, the trail was put to immediate use, Novak said. Students in extended school year programs used it, as did district leadership teams attending professional development. He said one group of students with special needs emerged from walking the trail saying they felt calm, peaceful and grounded.

“That was the fruition of all Nestor’s work,” Novak said.

Jane Daniels, an avid hiker and community activist who, along with her husband, has mentored about 25 Eagle Scouts over the years, said “Nestor is an exceptional scout who encountered obstacles along the way—including his mentors getting sick–but he didn’t let anything get in the way of completing the project.”

A sophomore at Kennedy Catholic High School, Garcia said he wants to continue to do things that help the community and support Boy Scouts. “Even if it is not related to my profession, I will always want to help scouts,” he said. 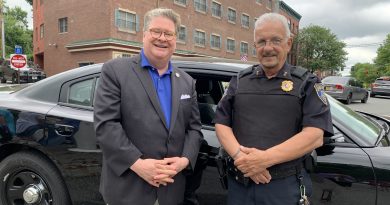