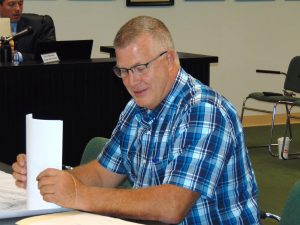 For the vast majority of Pleasantville residents, when they think about garbage, if they think of it at all, it’s to get rid of it.

The origin of the word garbage is “uncertain,” according to Google.  Nobody wants to even own creation of the word.

But its existence in our lives is brief. When it’s gone, it’s gone.

There’s no need to think of it again until garbage disposal day comes the next week.

These men go out in blazing heat, when the trash bakes and stinks from soaring summer temperatures. They’re out there in soaking rains and the biting cold in the darkness of February mornings. They’re witnesses to silent snowfalls and wind blowing through the trees.

The workers pick up the cans we leave out for them and dump the garbage in their truck, where a compactor compresses, compacts and crushes each bag tightly.

Angry dogs can confront them in yards where the men have to do backyard pick-up. About twice a year, a dog will bite one of them.

Aerosol cans in the garbage may spray chemicals on the workers when the bag containing the can is crushed in the truck’s compactor.

Sometimes cars are parked in the way of the trash receptacle and the workers can’t get to it. Or it isn’t there at all and the owner complains that the garbage wasn’t picked up.

If there’s six inches of snow on the ground, the workers can’t wheel their cart to get to the can. The wheels need hard ground to rotate.

Also, every week, some out-of-towners dump their mail in village street cans. Once the men found a bag of concrete in a village can. It took two men to get the bag out of the can.

Paper, cardboard and plastic go to a Westchester facility in Yonkers, across the highway from Costco, Home Depot and Stew Leonard’s, where it is separated and sold for recycling to private companies.

The job is exhausting, according to Econom. To help with homeowners who don’t put out their garbage in time, Econom has given the men phones with cameras. They can take a picture with a time stamp that can prove there was no garbage out at pick-up time.

Also, for out-of-towners who dump their mail in the village, Econom calls them up and tells them to come to the Department of Public Works headquarters at 1 Village Lane to get their garbage.

“It’s not fair to taxpayers,” Econom said of the weekly dumping.

The Pleasantville Police Department also keeps an eye out for non-residents putting their trash in village cans.

Econom is candid about the challenges of the job. “You need a strong stomach.”

He’s very thankful for the crew he has.

“I have a great bunch of guys. They do a helluva job.”

Pleasantville resident Michael Gold has published op-ed articles about the environment in the New York Daily News and the Albany Times-Union. He has written four books, including “Consumer Culture is Consuming Us” and “God in Crisis – The Destruction of the Environment and its Consequences for Our Relationship With God.”