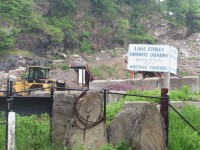 Judge Marc Lust told an attorney for Lake Street Quarry owner Lawrence Barrego that if they seek any more delays in the local court case the Harrison court needs to receive a sworn statement detailing why. Attorney Michael Sirignano said Barrego is awaiting a decision by the state Supreme Court in a separate appeal of a 2009 “stop work order” at the quarry.

Lust reminded Barrego and his attorney that the new violations were cited this year, after the earlier stop work order, and still need to be resolved. The judge set a court appearance date of July 10 on new charges, and a September 4 trial date on code violations first identified in March.

Barrego assumed operation of the quarry in 1985 from his father and grandfather. He has argued that the quarry predates Harrison zoning laws, which were adopted in 1923.

Lust also said the code violations need to be addressed regardless of a recent application to the Harrison Town Board to change the quarry’s zoning to a “neighborhood business.”

“You’ve had probably over a year to get this thing resolved,” Lust said in court on Thursday. “We’re not adjourning it today,” Lust said. “No continuance. No conference. . . I am not going to let this thing string out. You should have asked for a stay. You’ve done nothing.”

Barrego left the Harrison court with his attorney, declining to comment.

FitzSimmons said the quarry was in violation of 19 codes that need to be addressed, including the alleged dumping of refuse and yard waste.

The stop work order, signed on May 14, listed 16 of the alleged violations of Harrison codes, including the lack of a storm water retention and collection system and no site plan approvals for parking, fencing and trailers.

FitzSimmons said the quarry is prohibited from accepting any more recyclables and waste, and is not allowed to sell any material from the quarry while the stop work order is in effect.

Since March, neighbors who live along Old Lake Street and Lake Street have complained to the town board about continued noise, dumping, dust and other pollution at the quarry.

Supervisor Ron Belmont and Town Attorney Frank Allegretti have pledged to address complaints about quarry operations, but have said they are restricted from saying much publicly due to ongoing litigation.

The 2009 “stop work order” was issued after neighbors complained the quarry was operating heavy equipment in the middle of the night without permits.