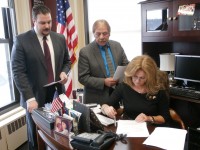 In the first round of a legal battle between Putnam County and The Journal News, a New York State Supreme Court Justice ordered the county to turn over pistol permit records to the Gannett owned publication. But the county isn’t finished with its fight just yet.

In an interview with County Clerk Dennis Sant, who originally denied the newspaper’s request in Dec. 2012 after it filed a Freedom of Information Request to get the data, he said the county is submitting a stay in court to hold off on releasing the names and there is a plan on putting together an appeal that would go to the next highest court.

The county has 30 days to file a notice of appeal.

“I’m extremely disappointed,” Sant said of the recent court decision. “I don’t agree with the judge’s decision. I guess if his name was being published it’d be a whole different story.”

After The Journal News sued for the pistol permit data, Supreme Court Judge Robert Neary, in a five-page decision, ordered the records to be turned over because the NY SAFE Act allowed gun owners to remove their names from a public database after the law was passed in January 2013. Permit holders that did not ask for their information to be removed are subject to have their information disclosed publicly.

In a press release, County Executive MaryEllen Odell said the county has held firm that pistol permit holders are entitled to their privacy.

“Publishing information on permit holders does nothing more than create a dangerous roadmap for those with a criminal intent,” Odell said. “People who have chosen not to have weapons in their homes become unnecessarily vulnerable.”

Deputy Clerk Michael Bartolotti said there is a fear among some residents that the county is going to hand over the information immediately. But he pointed out there are possible “avenues in the law to protect the safety and privacy of our citizens.”

“Though Judge Neary closed the door,” Bartolotti said. “He left the window open.”

The lawsuit was defended by all county employees and Judge Neary denied The Journal News’ request to have Putnam pay its legal fees, which means there has been no fiscal impact toward county taxpayers as a result of the suit, which lasted more than four months.

In an article by The Journal News, CynDee Royle, the newspaper’s editor and vice president/news, said the law is clear that the records belong to the public. She added the newspaper would not produce lists or maps identifying permit holders with the information it is seeking because the data isn’t as comprehensive since permit holders can now opt out.

The newspaper took heat and was even threatened by gun advocates after it published an online interactive map of Westchester County and Rockland County pistol permit holders in Dec. 2012 after the mass shooting in Newtown, CT.

Sant said he doesn’t trust what The Journal News would do with the obtained information and isn’t convinced it wouldn’t use it for another interactive map. He’s encouraging residents to fill out an opt-out form in order to keep their information private and feel secure.

“If they are pistol permit holders they need to run, don’t walk, and get to our office and fill out an opt-out form,” Sant said.

Currently, Sant said there are more than 10,000 permit holders in the county and more than 2,000 holders have opted out already since the law has been enacted. Residents that want to opt-out are encouraged to contact Bartolotti at 845-808-1142 ex. 49303