Skip to content
The Examiner
December 18, 2018December 20, 2018 Examiner Media Chappaqua, New Castle, Pleasantville
We are part of The Trust Project

Prior to her acquisition of Chappaqua Transportation, Corwin was a transportation supervisor for Northern Westchester BOCES. In 1990, her company was recognized by the U.S. Department of Labor as one of 15 model small companies in the nation for implementation of its drug testing and Employee Assistance Program.

Corwin received an associate degree in nursing in 1987 from Westchester Community College and was a registered nurse at Northern Westchester Hospital from 1992 to 1994.

Throughout her life, Corwin was involved in numerous community volunteer efforts. She served as an emergency medical technician for the Chappaqua Volunteer Ambulance Corps starting in 1972 and also served stints for the corps as second lieutenant, first lieutenant and captain from 1977 to 1982. She again served as captain from 1994 to 1995. She also volunteered as an emergency room EMT at Northern Westchester Hospital from 1977 to 1984 and as a registered nurse from 1987 to 2000 for the New Castle Senior Citizens.

Corwin was president of Mother’s Hens Helpers, an organization she created in 1993 to help parents by providing transportation for nannies and schoolchildren before and after school hours.

In 1998, Corwin was appointed to the state Bus Driver Training Council by Gov. George Pataki.

Over the years, Corwin was active in the Chappaqua and Pleasantville Rotary clubs, having served as the Chappaqua chapter’s president in 1991 and named as its Citizen of the Year in 1999. She was also the recipient of numerous awards and commendations from various professional and service organizations, including a Lifetime Achievement Award from the Chamber of Commerce and a Community Service Award from the Chappaqua Rotary in 2013.

She is also credited with being instrumental in the passage of legislation banning the use of hand-held cell phones while operating a motor vehicle.

Corwin was also widely known for her generosity. During snowstorms she would bring in homemade soups and chili for the town’s Highway Department workers and police officers. She continued to provide soups for the Highway Department and bus mechanics during cold weather until recently. She also took in several high school students who needed homes. 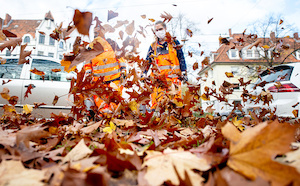