Skip to content
Other News
March 1, 2020June 9, 2020 Examiner Media
We are part of The Trust Project
Examiner Media joins news outlets across the United States in supporting the National Student Essay Competition designed to deepen a recognition of the First Amendment, strengthen freedom of the press and bolster trust between readers and the organizations who serve them.
We believe there is no more important time than now to focus conversation and critical reflection on understanding the crucial relationship between the First Amendment, a free press, and the foundations of democracy.
Students in grades six through eight, grades nine through twelve, and those at universities and colleges are invited to submit essays to their participating local newspaper examining the state of freedom of the press in the U.S. today and the importance of the First Amendment to our Constitution.
Examiner Publisher Adam Stone noted how critical it is for young Americans to understand the unique and critical role independent media plays in a democratic society.
“It’s vital for the next generation to have not just general knowledge but also a deep understanding and appreciation for the inseparable connection between a free press and the ability to maintain a healthy democracy,” Stone said. “From the local and state level and all the way to national news reporting, our country can only function as a free society when we have a robust free press and citizens and leaders who believe in and defend our cherished First Amendment rights.”
Students served by the Examiner group of newspapers in Westchester and Putnam counties may submit essays to Stone beginning Monday March 2, 2020 through Friday April 17, 2020. Email submissions to astone@theexaminernews.com. Winners in each category selected by Examiner Media will then be submitted to a national jury who will select the semi-finalists and then the finalists by early September 2020. Examiner Media will announce local winners on the first week in June 2020.
The national winner in every category (grades six-eight; grades nine-twelve; and grades university/college) will each receive a $5,000 check from the Boston Globe Foundation. The winning essayist with the highest ranking among the three categories will also receive a full four-year scholarship, currently valued at $38,000 a year, to Westminster College in Salt Lake City. Prizes will be awarded late fall (TBA) at the 15th Annual McCarthey Family Foundation Lecture Series: In Praise of Independent Journalism.
“The competition is designed to engage the important voices of our students, voices that are vital to the future of a robust democracy, and to expand national dialogue about press freedom by encouraging discussion at home and in school,” National Student Essay Competition Director Mary Kay Lazarus said.
More information can be found here: https://mklpr.com/national-student-essay-competition
Examiner Media publishes four weekly print community newspapers, The Examiner, The White Plains Examiner, The Northern Westchester Examiner and The Putnam Examiner. Our corresponding news website, TheExaminerNews.com, publishes daily and powers a five day per week free email blast.
Across Westchester and Putnam counties, Examiner platforms serve about 100,000 readers.
Examiner social media:
https://twitter.com/examinerstone
https://twitter.com/ExaminerMedia
https://www.facebook.com/ExaminerMedia
Readers can subscribe to the email blast here: https://www.theexaminernews.com/examiner-media-eblast-sign-up/ 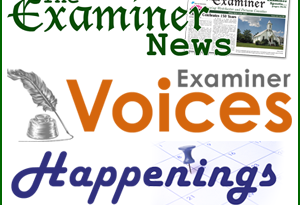