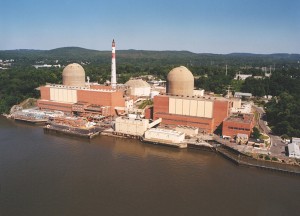 Early last Tuesday morning Indian Point Energy Center’s unit 2 nuclear power reactor was shut down to repair one of four pumps that supplies cooling water to the plant’s reactor. It has remained inoperative since then.

Riverkeeper president Paul Gallay, who is an advocate of closing Indian Point, attended a public hearing conducted by the state Assembly on Thursday and said that the broken pump was a sign that the plant was “past its expiration date.”

“The pump failure at Indian Point, which forced the shutdown of one of the plant’s two reactors, yet again demonstrating the risks associated with continuing to operate this old, outdated plant,” said Gallay.

Entergy, which owns the Buchanan-based Indian Point power plant, has released a statement that the plant will return to service when the maintenance work is complete, but no date has been given. The pump that needs to be repaired is located inside the containment building and, according to Entergy, there was no release of radioactivity and the Nuclear Regulatory Commission (NRC) was notified of the shutdown.

Unit 2, which was built in 1974, operated for 230 continuous days prior to this shutdown. It was last shut down on May 20, 2011 for six days to replace three high voltage bushings on a main electrical transformer.  On Nov. 10, 2010 the reactor was shut down after an explosion occurred in the main transformer.

Unit 3, which was built in 1976, continues operating at full power and has been online for 278 continuous days since returning to service following a refueling shutdown in March 2011.

Together the two reactors generate approximately 2,000 megawatts of electricity for homes, businesses and public facilities located primarily in New York City and Westchester County. Indian Point produces up to 30 percent of the region’s electricity.

The reactors are in the midst of the relicensing process with the NRC. Unit 2’s license expires in 2013; unit 3 in 2015.

Like other opponents of Indian Point, Gallay wants to the nuclear power plant to close and for alternative forms of energy to be used to fill the void.

At the same public hearing that Gallay attended, a representative from Entergy spoke. Michael Twomey, who is the vice president for external affairs for Entergy, told the assembly members about Entergy’s safety record at Indian Point.

“Entergy’s operation of Indian Point has been outstanding,” Twomey said in a prepared statement. “The facility ranks among the most reliable in the nation. Indian Point has held the highest safety ratings (green) for the last six years and passed key safety assessments performed by both the Nuclear Regulatory Commission and the Advisory Committee on Reactor Safeguards as part of the license renewal application.”

In April 2007, Entergy submitted a license renewal application for the Indian Point facility to the NRC. In Aug. 2011, the NRC issued a safety review finding on   Indian Point and found it to be safe and supported the relicensing of the facility.

In the license renewal proceeding, there are 20 contentions raised by various parties such as Riverkeeper and New York State that will be the subject of hearings before the Atomic Safety and Licensing Board.  The hearings are expected to begin in 2012. After resolution of the admitted contentions, the NRC may proceed with a final decision regarding whether to grant renewed licenses.

Under federal law, because the application was submitted five years prior to the license end dates, Indian Point may continue to operate while the NRC proceeding is pending.
There are 104 operating nuclear power plants in the United States. The NRC has no history of denying a relicensing application.