Every year around this time some of the most interesting and argumentative sports columns gets written by members of the Baseball Writers of America Association (BWAA) stating their personal philosophy who will or will not get to be enshrined at the Baseball Hall of Fame in Cooperstown. The BWAA is a very unique bunch of writers. Sometimes they let the character of the ball player and how well he treated the media during his playing days become a major determining factor in their voting. If you need an example just Google “Jim Rice and the baseball hall of fame.

Also now the BWAA has the task of being the judge and jury for the so-called steroid era in baseball. There are no rules or guidelines from either Major League Baseball or the Baseball Hall of Fame telling writers how to vote concerning a player who was caught doing steroids or is rumored to have used them and not been caught. I went online and printed out the ballot that the BWAA writers get and in this space below give my opinion on how I would vote for this year’s induction if eglible

Before I give my selections I will give you my philosophy about ballplayers who have admitted or tested positive for steroids. I do believe they belong in the Hall of Fame but the first sentence of their induction plaque should say some like “This player tested positive for performance enhancing drugs or something to that effect. I also believe Pete Rose and Shoeless Joe Jackson belong in the Hall of Fame but also deserve the first sentence of their Hall of Fame Plaque talk about them being guilty about betting on baseball.

Without further to do here are the results to my ballot. There are a total of 27 players listed on the 2012 ballot including first timers Bernie Williams (former Yankee great), Ruben Sierra (former Yankee), Jeremy Burnitz (former Met) to name a few. A BWAA writer can vote for up to 10 players and a player need a whopping 75% of all voters to qualify for the Hall of Fame.

I ended up voting for seven players Barry Larkin, Jack Morris, Lee Smith, Jeff Bagwell, Tim Raines, Edgar Martinez and Don Mattingly. Didn’t vote for Juan Gonzalez, Mark McGwire and Rafael Palmeiro due to steroids. When Major League Baseball and the Hall of Fame agree to make their first line of their plaque be about steroids I will vote for them along with future candidates Barry Bonds and Roger Clemens.

The players that were close on my list and didn’t make the cute are Bernie Williams, Dale Murphy, Alan Trammel, Larry Walker and Javy Lopez.

Now I explain why I voted for the eight players to get in.

1. Barry Larkin-He is a perfect reason why sometimes I get frustrated by the Hall of Fame Voters sometimes. He won a MVP Award, won three gold gloves, stole 379 bases, appeared in 12 all-star games and batted .300 nine times in his career. This is his third and final year on the ballot. If anyone gets elected this year it should be Larkin.

2. Jack Morris- if you’re under the age of 30 it hard to truly explain how good Morris was. He was one of the premiere starting pitchers in the American League for many seasons. He had 175 complete games and 28 shutouts. His 254 wins is a important number when consider present day baseball and you ask yourself how many current pitchers will pitch long enough and stay healthy to win that many games in their career. He was outstanding in the 1984 World Series for the Detroit Tigers winning two games and he won two more series games for the Minnesota Twins in 1991.

3. Lee Smith- The BWAA and most baseball fans don’t consider total number of saves as sacred as other statistics such as hits, home runs, wins and strikeouts. Smith’s save numbers tell the story. He is third in on the all-time saves list behind Rivera and Trevor Hoffman. That number in itself I think put him in the Hall. His 1982 and 1983 seasons were dominating. He had a career earned run average of 3.03, which is impressive. Fellow closers Bruce Sutter, Goose Gossage, Dennis Eckersley and Rollie Fingers already are in the Hall. It’s time for another close to be enshrined.

4. Jeff Bagwell- The problem with Bagwell’s chance of induction is rumors about his steroid and performance enhancing drugs use. He never tested positive and wasn’t named in the Mitchell Report. So we have to treat him as clean unless some other info comes out. He had a career .948 OPS (On-base percentage plus slugging percentage), 449 career home runs, 1517 runs scored and a .297 career batting average. Bagwell won a Rookie of the Year and a MVP award. Those credentials are good enough for me.

5. Tim Raines- When I think about Raines I think about how he tormented the Mets when he played with The Montreal Expos. He was the second greatest lead-off hitter of his era behind Rickey Henderson. Raines could run like the win and had 808 stolen bases in his career, 294 career bating average and over 2600 hits.

7. Don Mattingly- this is a sentimental vote I can’t lie. I’m voting with my heart and not my head here. I know the only chance of him making the hall of fame is through the veterans committee many years from now. Winning a couple of World Series as a manager would help his cause a lot. Even though I’m a Mets fan I really appreciate Mattingly as a player. I think he was the best player in baseball from 1984-1989. Mattingly won nine gold gloves and had a career .307 batting average. The only better fielding first baseman in my mind was Keith Hernandez. If Mattingly didn’t get hurt his numbers would have been at hall of fame standards.

Peter Gerken is a Westchester County native and has published previously with The Patent Trader and the Bronxville Review Press. While attending Boston College he was the sports editor of the university’s newspaper, The Heights, and served as a staff writer for the Boston College sports publication Eagle Action. He can be reached at pgerken@theexaminernews.com.

A Top Prospect Makes His Debut With the Renegades 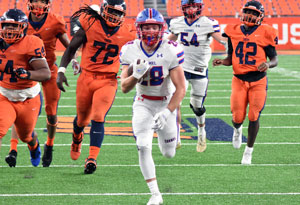