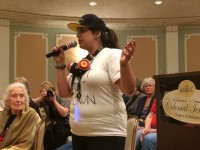 Several hundred people turned out for a public meeting last week focusing on the safety and future of the Indian Point nuclear power plants in Buchanan.

Environmental groups and community leaders were given an opportunity to ask panel members from the Nuclear Regulatory Commission questions on a number of issues including earthquake risk, spent fuel rods and the evacuation plan for the surrounding communities.

There were some tense moments during the public open meeting at Colonial Terrace in Cortlandt, which was held as the NRC is considering relicensing Entergy’s Indian Point 2 and Indian Point 3 power plants. Several speakers asked the panel how the plants could be considered safe if they are built near the Ramapo earthquake fault line, which runs from eastern Pennsylvania to the Hudson Valley, about two miles northwest of Indian Point.

Others questioned the plants’ ability to withstand storm surges, such as those seen during Hurricane Sandy in 2012.

“Indian Point was designed to withstand a 15-foot storm surge,” said David Lew, Deputy Regional Administrator of Region 1 with the NRC. “The surge during Sandy was seven to nine feet. We tracked Hurricane Sandy very carefully throughout and there were no performance issues we could identify.”

Eugene Goldenberg, a member of the Somers Town Planning Board, was among those who expressed concern about the evacuation plan. “If something happens, how in the world are we, with all the traffic we have–even on a good day– going to get out of there? No one’s been able to answer that question, including the County of Westchester,” he remarked.
Kevin Williams, Branch Chief of the Division of Preparedness and Response for the NRC, responded, “We take our job very seriously. One of the things we do is evaluate plans of such things as Hurricane Katrina and work with FEMA to come up with good evacuation plans.”

“The plant is about jobs–there are 3,300 jobs in Westchester alone–that would be lost if Indian Point is not around,” said Paul Steidler with the Affordable Reliable Electricity Alliance (AREA), “It operates to the highest standards of safety. The plants’ owner has put a billion dollars into the plant to make it a world-class facility. Without Indian Point, there’s no way around the fact that you are going to have higher carbon emissions because a majority of that energy is going to have to be replaced by fossil fuels, which will be very bad for climate change and global warming.”