HEN HUD left no doubt as to who was the best and most dominant Class B girls’ volleyball team in New York State.

The Sailors entered the New York State Public High School Athletic Association final four undefeated (22-0) and were determined to return from Glens Falls to Montrose in the same fashion. Hen Hud was playing at such a high level this season that it had only lost one set to date.

Hen Hud carried the momentum into the final against Wayne and added the exclamation point to its outstanding season with a 25-9, 25-18, 25-17 sweep of the Eagles (18-4). The Sailors won their fourth state title in their 11th trip to the state finals under legendary Coach Diane Swertfager. Dating back to the fall of 2021, the Sailors have only lost one match over this two-year stretch and that was in the 2021 state finals.

Freshman Julia Nelson added the state-championship point with an excellent serve that Wayne was unable to handle.

“I can’t even put it into words,” said senior, captain and four-year varsity player Amya Davis, who had 16 kills, 12 digs, three aces and a block in the Sailors’ state finals win.

“This being my third time at state, there was so much want to finally get it. I felt everything pouring out. I couldn’t stop crying tears of joy until I got on the bus.”

Davis was named the Class B most valuable player and teammates Camille Gibson (15 digs in finals) and Marta Przybylowska (11 kills, seven digs, two aces, one assist and a block) were selected all-tournament.

Davis and Gibson, along with classmate and fellow captain Vera Montalbano (two assists, a kill and a block) accepted the state championship plaque.

“It was just so surreal,” said Davis of holding the state-title plaque. “I couldn’t believe it was happening. It was everything I’ve wanted for so long. It was the most amazing feeling.”

“Last year, we were young and it was a new experience for a lot of us that I think we were not able to lock in and get out of our heads,” Davis said. “This year, everyone was able to play through the nerves and deal with it. We were able to persevere through them, have fun, find a rhythm and get the job done.”

Hen Hud’s performance during pool play was masterful. From the second set of the Westhill match forward, the Sailors dictated terms and their opponents could not handle it.

“Every team was so good and every team had so much to offer,” Davis said. “We felt that if we played hard, played our game and responded the way we did, we might actually be able to win a state title.”

Swertfager witnessed her team play its best volleyball once sectionals began, and she was impressed with the way her team responded when it lost those two sets or was trailing in a set.

“When we lost the one set at regionals the girls showed me they were composed.” Swertfager said. “When you fall down, you have to get back up and keep going.

“When we fell behind in the third set in the final, you could still see their confidence. They were on a mission and they were very mature about it.”

Davis and her teammates will always be remembered for their crowning achievement.

“This means everything because we worked hard and got the job done,” Davis said. “All those hours of sweat, tears and occasional blood, was worth it. We will always have that place at Hen Hud as state champions.”

Swertfager said she was happy for everyone, from the players, to their families to the community.

“They shared success together and worked together as a family. And this weekend, the family worked very well together.”

The Sailor family did major work behind the play of Olivia Tran, who set things up with 21 assists, four digs, one ace and a kill. Julia Nelson had 15 assists, four aces, one dig, a block and two kills. Ryan Calhoun had six kills, four digs, three aces and two blocks. Madison Porter had seven digs and a kill. Adelina Elezaj had three kills and four digs. 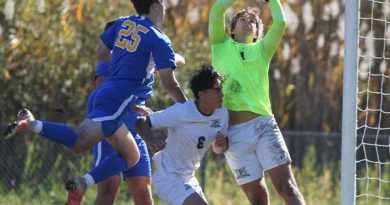