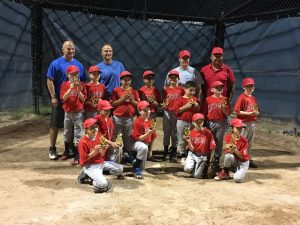 The youth baseball Angels of the Mahopac Sports Association captured the championship for the third and fourth grade age Colt division on Sunday, June 23, in a 6-3 triumph against the Orioles.

The Angels finished in third-place out of six teams with a record of 6-3-1 during the regular season but surged in the playoffs. They beat the second-place Astros in the semi-final playoff game, allowing the squad to advance to the championship matchup.

Aiden Kugler led the charge for the Angels in the championship at Crane Road Field, going 2 for 3 with a run scored and an RBI. Not only did Kugler perform at the plate but he also delivered on the mound. Up 6-3 in the top of the fifth, the Angels handed the ball off to Kugler in relief. He pitched the final two frames, striking out six Orioles to seal the victory.

“The coaches taught these boys that although baseball is just game they would learn life lessons this season, lessons they can carry throughout their lives: hard work, sportsmanship, teamwork and dedication toward a cause,” observed Angels Coach John Kugler. “The boys played hard and had fun all season from start to finish and we are so proud of what they accomplished as a team. They truly deserved this championship.”

As for the Orioles, Coach Johnny Long said he was proud of his team’s first-place finish during the regular season despite the disappointing loss in the decisive game.

“Great season, all the kids on the team worked really hard in practice and in the games,” the coach said. “They never questioned when coach Melissa Zeiler, Coach Scott Rothmann or myself asked them to do something. Finishing in first-place for the regular season was exciting and the kids were ecstatic. Obviously, we fell a little short in the championship game and we were all a little disappointed but I asked everyone to hold their head up high and be proud of what we were able to accomplish from start to finish.”