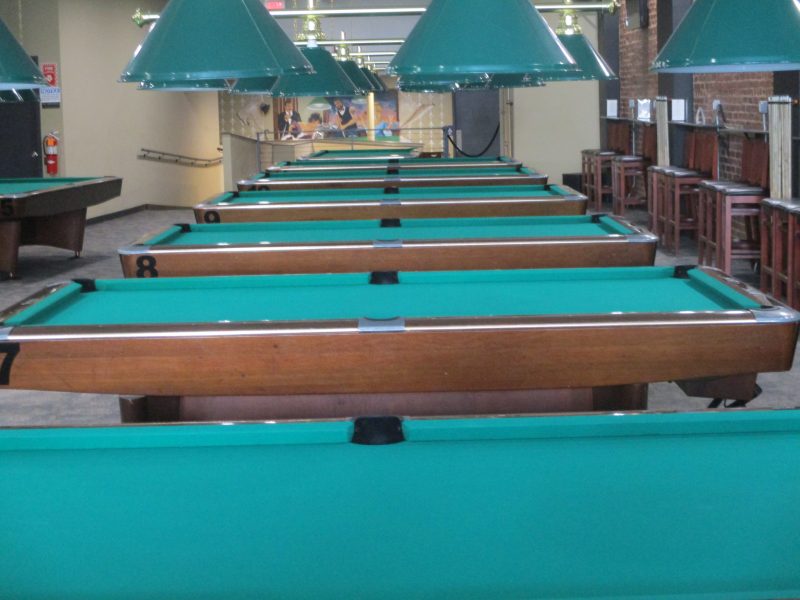 Some of the pool tables in the Hard Luck Pool Hall & Lounge in White Plains. Neal Rentz Photo

Niko Frangos has enjoyed playing pool since he was a youth.

For the past 20 years he has turned that passion into his career by running the family-owned Hard Luck Pool Hall & Lounge. “I always liked it,” Frangos said last week. “I enjoyed hanging out there when I was a kid.”

Frangos, who splits his time between New Jersey and White Plains, said the pool hall originally opened on Mamaroneck Avenue in White Plains, which was in operation for about 30 years before he and his family purchased it two decades ago. Hard Luck was moved to its current E. Post Road site two months ago.

Hard Luck currently has 12 pool tables and Frangos said he would like to have additional tables in the basement and on the second floor in the future.

Hard Luck is more than just a place to play billiards. It features 11 big screen televisions used to broadcast sporting events. It also offers a menu featuring mixed drinks and10 draft beers on tap with seven from local breweries.

“All our food is air fried finger food,” Frangos said. The equipment used in his kitchen is a high-speed air fryer, he noted. “Nothing is deep fried. There’s no oil,” he said, adding jokingly, “It’s the healthiest junk food around.”

Frangos said his customers come from various local communities. There are only two other pool halls in the local area, he said. The reason for the lack of pool halls is the rent because there needs to be a large space to fit all the pool tables, he said. “If you don’t have a bar you can’t survive,” he said.

“We want to make this very woman friendly,” Frangos said. The facility has light colors and high ceilings, which are “totally opposite of what people think when they hear pool hall. That’s what we were going for,” he said.

Frangos said service is important for his business. “We try to make the customer comfortable,” Frangos said. “We go out of our way with customer service.”