By Martin Wilbur and Anna Young 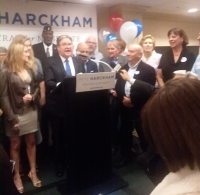 Harckham ran up the vote total in Westchester (40,579-31,247) with 88 percent of the districts reporting, offsetting about 6,000- and 2,000-vote margins in Murphy’ favor in the Putnam and Dutchess portions of the district, respectively, according to unofficial Board of Elections totals at about 1 a.m.

The outcome, coupled with leads held by Democrats in seats currently held by Republicans in Long Island and Brooklyn, helps the Democrats take over control of the state Senate for the first time in a decade.

“We said many times, this election was about values and today the Hudson Valley spoke,” Harckham said at his election headquarters at the Holiday Inn in Mount Kisco. “It wants to be more tolerant, more accepting and a more inclusive and a more civil place to live.”

A Harckham victory ends 104 years of Republican dominance for the state Senate seat representing much of northern Westchester and Putnam County. Harckham acknowledged that he has work to do to gain the trust of constituents and local officials who may be unaccustomed to having a Democratic state senator represent them.

“To the people who did not vote for me, I just want to say, I work for you, too, and over the coming weeks and months I will work hard to gain your trust,” he said. “I represent you.”

While Murphy didn’t officially concede the race at his Election Night headquarters in Jefferson Valley, he acknowledged the prospects weren’t promising. After a sometimes divisive campaign, he struck a conciliatory tone on Tuesday night.

“I wish Peter Harckham the best, and may he have as much success as I did because it’s been an honor and privilege,” Murphy said.

Harckham, 57, a Lewisboro resident, served on the Westchester County Board of Legislators from 2008 until June 2015, when he left for Gov. Andrew Cuomo’s administration.

He said the difference in the race was the efforts of the legions of volunteers who worked on his behalf knocking on thousands of doors, making thousands of phone calls and sending out about 25,000 postcards.

With the state Senate in the hands of the Democrats come January, Harckham said key legislation that had been passed by the Assembly but held up in the Senate, such as the Reproductive Healthcare Act, the red flag bill and the Child Victims Act, will be approved, probably in the first 30 days of the new session.

But there are issues that everyone can agree on such as keeping taxes in check.

“The days of the old Democrats coming in and raising taxes on everybody, that’s just not going to happen,” Harckham said. “We can’t let that happen and there’s some good fiscal policy and good legislation we want to get passed.”