Hope all you dads out there had a great Father’s Day this past weekend. Looking forward to seeing my pop upon his return from sunny Florida, along with the matriarch this week. These hugs are a long time coming due to this COVID-19 pandemic that won’t cease and desist. We’ve made some great strides in this neck of the woods and one can only hope for some form of normalcy by the Fourth of July or shortly thereafter.

In the meantime, dads, remember it’s okay to sprinkle in a “no” every now and then between the “I love yous.” It’s pretty clear these days that we haven’t mixed in enough “No, sorry, kiddo!” while we were handing out participation trophies to everyone just for signing up. 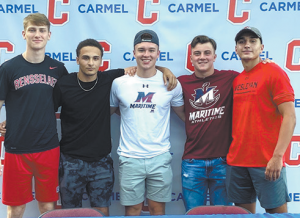 But it was a joy to skim through Facebook Sunday and see a slew of proud papas and their young’uns plastered all over my screen, so I imagine there were some prideful pops out there this weekend, beginning with Bob Townsend of Chappaqua. Horace Greeley junior Nick Townsend and his older brother Matt, a 2015 Yale University graduate, are basketball royalty in Quakerland.

The sons of Bob and Lori Townsend are the epitome of student-athlete. They are high-A students and superbly gifted athletes. Young Nick just picked up his first college offer this week from Yale, the school where his brother Matt, Greeley’s 2011 valedictorian, joined the Bulldogs after a stellar Section 1 hoops career.

Nick, a growing 6-foot-6 forward who was named Section 1’s Mr. Basketball last March after leading the Quakers to their first sectional crown since 1980, has also been in touch with Stanford, Columbia, Brown, Boston University, Army and Air Force, some of the finest institutions in this country. Should Townsend, the first sophomore to win the Section 1 Mr. Basketball honor, back up his sophomore campaign with, oh, let’s say one or two more Mr. Basketball awards, he’ll have his pick of the litter come signing day.

On Father’s Day this past Sunday, I’m betting there was one proud papa somewhere in the sticks of Chappaqua.

Similarly, Ossining’s Jim Curry had to be puffing out his chest last weekend when his son, Aidan, a 2020 Fordham Prep grad, inked an MLB rookie deal with the Texas Rangers. Aidan Curry, a 6-foot-5, 180-pound righthander with an 88-mile-per-hour heater, fulfilled his lifelong dream with some help from former Walter Panas baseball stud Mike Anderson, owner and chief pitching coach at Just

“My parents have been incredibly supportive since I was eight years old,” Curry said. “They were always there for me. My pitching coach Mike Anderson and conditioning coach Ian Cole are the two guys that have pushed me to go the extra mile, so thanks to all of them.

“Coach Mike pushed me to realize that I had the stuff I needed to get to the next level,” he added. “He helped me flip the switch to get here. He pushed me to perform and helped me discover two paths, either of which would have been great for me.”

Those two paths included a full ride at Bucknell University or a shot at pro ball, which came about through the persistence of MLB scout Takeshi Sakurayama, aka “T-Money.” Curry is good, really good, but anyone that knows him knows he’s more than just some kid in a baseball uniform.

“He is a better person than he is a baseball player and he truly worked for his dream,” said Anderson, a three-time East Carolina University captain who is among the most arm-protective instructors in the region.

Curry’s next stop is – surprise! – Arizona, the spring training home to the Texas Rangers and Kansas City Royals, provided the complex reopens after being shut down last week amidst several COVID-19 cases.

“I’m obviously very excited to get it going,” Curry said. “To be competing in a big league training facility is a dream come true.”

And speaking of proud papas, one can only imagine the surge of pride Mahopac’s Bob Becker felt when his daughter Shannon, the 2020 NYS Gatorade Player of the Year, recently combined with East Cobb Bullets (Ga.) teammate Lexie Delbrey on a perfect game against the Atlanta Vipers, one of the top 10 18U teams in the country, in Woodstock, Ga.

Randomness: Aunt Jemima, the Eskimo Pie, Paw Patrol, even George Washington, for God’s sake, Uncle Ben, and probably before long, Uncle Fester and Uncle Grandpa, are all endangered species these days. I’m surprised they haven’t come for Father’s Day, too, since there are scores of deadbeat dads across the globe…Go ahead, continue to disrespect and vow to defund the police in these mega cities across the country and you will reap what you sow…

What in the world is going on with the exodus from Carmel High School? Superintendent Andy Irvin – shortly after having his contract extended for one year – has up and curiously resigned, effective late summer, joining Health and Athletics Director Susan Dullea, who departed for Rye High. This, on the heels of Irvin’s refusal to back former football Coach Todd Cayea, who failed to be reappointed after 25 years and a 2019 Section 1 Coach of the Year honor. That’s alot of administrative leadership to lose in a little more than a month, but the community is resilient and should find a way to proceed. It’s just not a good look right now no matter how you spin it.

Anytime we name someone or something, it’s usually done as some form of reverence, like the Gaels, the Fighting Irish, and, yes, even the Indians! Are the Irish ticked about that? No, not one of the scores of Irishmen I know has ever protested it, so why are folks coming at Mahopac High, yet again, about its Indian nickname, which many in Mahopac claim honors the past of Native Americans (most notably the Algonquin) and its deep-rooted connection to the region?

The world has had a host of things gone awry within the last three months (see Seat-tle #CHOP), but there were the ABC Newsvans in Mahopac last Friday spewing nega-tive reports regarding its representation of the Indian mascot, which is the letter M with a simple Seminole hunting lance through it (no headdress etc). LoHud jumped in with a piece, too.  The Indian is revered in Mahopac and its connection with Native Americans is honored by thousands at weekly sporting events to respect those who occupied the territory before them. On the other hand, I can see their point about the Redskins. That’s a step too far.

What about the recent revelations regarding Yale, Brown, Rice and Georgetown  allegedly having illicit ties to their universities? Oh, that doesn’t fit the narrative, so it’s okay? How about going after the Pirates instead. I don’t recall reading much good about Blackbeard or Captain Morgan in my history books, though the latter makes a mean rum-based punch. #Leave MahopacAlone!