Skip to content
The Putnam Examiner
March 9, 2020 Holly Crocco 377 Views 3 min read
We are part of The Trust Project

Haldane Superintendent of Schools Dr. Philip Benante has recommended that the Board of Education approve a 2020-21 budget that increases the property tax levy by the maximum allowed by the state, which represents a 3.3 percent increase from this year’s budget.

During the board’s March 3 meeting, Benante explained that this equates to an estimated $56 per $100,000 of market value property.

The $25.2 million budget represents a $660,000, or 2.69 percent increase from the current year’s budget. According to Benante, the rollover budget – the starting point for administration in drafting the budget based on spending that rolls over from this year – leaves the district with a deficit of about $430,000.

With state education aid increasing “a whopping $2,500,” the superintendent explained that Haldane is a school district that generates most of its revenue through the tax levy.

According to Business Manager Anne Dinio, the tax levy is the highest this year compared to past years because building aid drops off this year, and the tax cap calculation allows a district to add back its debt service, less its building aid.

“Our building aid dropped substantially, so what’s getting added back in is debt service at a higher level, and that makes our allowable tax levy higher,” she said.

Haldane is still paying debt on a 30-year bond issue from 15 years ago, in which it was only getting aid for 15 years. “So that variance gets added back to your tax levy limit and it allows us to tax more, because we’re getting less said,” explained Dinio.

“So what we’re not getting in aid we have to levy,” clarified Benante. “A major contributing factor in the levy calculation formula for next school year is debt service.”

Under the proposed spending plan, the administrative budget, which represents about 12 percent of the total budget, increases 4.7 percent from this year.

Benante noted that the proposed budget maintains all levels of staffing, which “is going to become increasingly hard to do.” However, by taking advantage of retirements – in which new teachers will be hired at a lesser salary – significant savings may be made.

The budget also includes the addition of a director of curriculum and instruction, the cost of which will be partially offset by modifying the district’s contract with Putnam/Northern Westchester BOCES, saving about $40,000.

Benante also outlined other areas where he feels reductions can be made, “without any sacrifices to the integrity of Haldane’s academic programs.”

By reducing the elementary school’s homework help program to two days per week, a savings of about $5,000 may be realized; by reducing the sixth-period assignments through scheduling efficiencies, $13,000 may be saved; a reduction in middle school intramurals may save $2,400; eliminating the school peace officer position (not to be confused with the school resource officer, which will remain) would save $35,000; and by making changes in administrative and support services, about $55,000 may be saved.

In addition, Benante said the district is anticipating some contractual expenses to change with regard to labor units, as the district is currently in the middle of contract negotiations.

Lastly, the teachers retirement system had rate adjustment, so while the district was anticipating a contribution rate of almost 11 percent, the final rate came in at 9.53, so the cost to the district will be about $40,000 less, according to the superintendent.

Benante encouraged the board to develop a budget that meets the tax levy limit.

“On average, we already spend less per student compared to other school districts in the region,” he said. Therefore, any “excess” funds will go toward enhanced programs, infrastructure support, and other services.

In May, in addition to voting on the budget, taxpayers will also be asked to vote on Proposition II, which would allow the district to purchase two buses, in line with the district’s vehicle replacement plan.

According to Benante, this is a “tax-neutral proposition.”

A public hearing is scheduled May 5, and the public budget vote is May 19.

Saland All But Concedes to Gipson a Month After Election Day 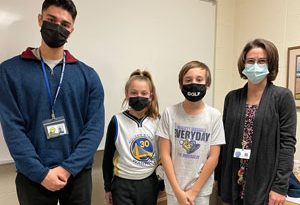