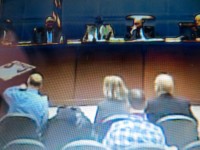 The proposed Game On 365 Sports Bubble again faces strong opposition from neighbors owning property near the former Franks Nursery and Westchester Golf Range on Dobbs Ferry Road in Greenburgh at a public hearing on a proposed recreational zone overlay at the Town Board meeting February 26.

For anyone keeping score, three partners of Game On 365 spoke out for a new sports bubble along Dobbs Ferry Road during a Feb. 26 Town Board meeting.

But two dozen vocal Greenburgh residents came out against rezoning their neighborhood to allow for the recreational facility. It was the second straight meeting that the idea drew opposition, and prompted the Town Board, by a 3-2 vote, to postpone any action for at least two weeks.

Only one town resident, a lawyer from Elmsford, said he favored the eight-story structure, where he said his nephews could play sports inside during the winter months. “I think there is a need for this,” Jared Kahn said. “I think the project should be expedited.”

Afterward, Supervisor Paul Feiner said, “We’re going to review some of the concerns people have and may look at downsizing. There’s some misinformation. I’m going to try to meet with some of the people who spoke out and calm them down. I have to be careful in giving everybody a fair chance.”

Although a public referendum in November 2012 OK’d development of a similar sports complex on adjoining property once used by Frank’s Nursery, at 715 Dobbs Ferry Road, developers continued to encounter opposition at that site.

The town continues to try to sell Frank’s property, with some potential bids coming in above $3.5 million. Town Councilman Francis Sheehan said the town should focus on selling that property before deciding whether to approve a zoning overlay that helps Game On 365 on the adjoining property at 701 Dobbs Ferry Road.

“I think this is premature,” Sheehan said. “We do not have to move this forward.”

Sheehan said if someone wants to develop an assisted living facility at Frank’s, they might not want ball fields and a sports bubble next door.

“At some point we are going to sell the Frank’s Nursery,’’ Feiner said. “I really think that an assisted living facility in the Dobbs Ferry corridor would make some sense and could generate for the town some revenue at Frank’s.”

The Town Board has been asked to consider rezoning property at 701 Dobbs Ferry Road, owned by the Westchester Golf Range, also known as Family Golf. The “overlay zone” would allow for new development as a Field House for year-round recreation including soccer, lacrosse, football, baseball and field hockey. The plan includes 80,000 square feet of turf and 14,000 square feet of hard court playing area for volleyball and basketball. A walking track would circle the entire field.

Game On 365 LLC has said it could additionally utilize the Frank’s Nursery property for field sports.

Wednesday, three partners of Game On 365 tried to allay neighbors fears that they would harm their property values, or that an 80-foot dome could cause anyone harm. They said the earlier referendum showed strong town support for a recreational facility. Managing Partner Vito Galasso said there are no plans to “flip the property” for a profit. “The founders of Game On are all from Tarrytown,” he said.

At the Jan. 28 Greenburgh Town Board work session, members of the Town Board heard from Game On 365 regarding a petition that seeks a zone change to create a recreation open space overlay district in the Town that would allow a sports facility to be built at the driving range. Game On 365 has an option to purchase the driving range property owned by Family Golf.  The golf range would continue to stay in business.

The sports facility would be built on vacant land near the golf range. The proposed site development that would result from the petition is very similar to the proposal the company submitted for the Frank’s Nursery property.

Neighbors came out strongly against the recreational project again last week. Linda Lee of 4 Country Club Drive said, “I love sitting out in my backyard and I don’t want to see a dome when I come home. It’s a peaceful place and I just hope you keep it that way.”

Rose Venuti presented a petition from 25 residents of Westchester View Lane against the “spot zoning. The majority of people don’t want it,’’ she said. “I don’t want to see a bubble.”

Game On 365 started out as a group of soccer parents, mostly from Tarrytown, who wanted a place for their kids to play during the winter. Teaming up with a partner who runs two similar complexes in New Jersey, they initially sought to lease Frank’s Nursery property for 15 years.

Matt Kennedy, another Game On partner, said his company has tried unsuccessfully to lease and buy Frank’s property. “We’re looking forward to a fair and open hearing. We’re interested in what you have to say.”