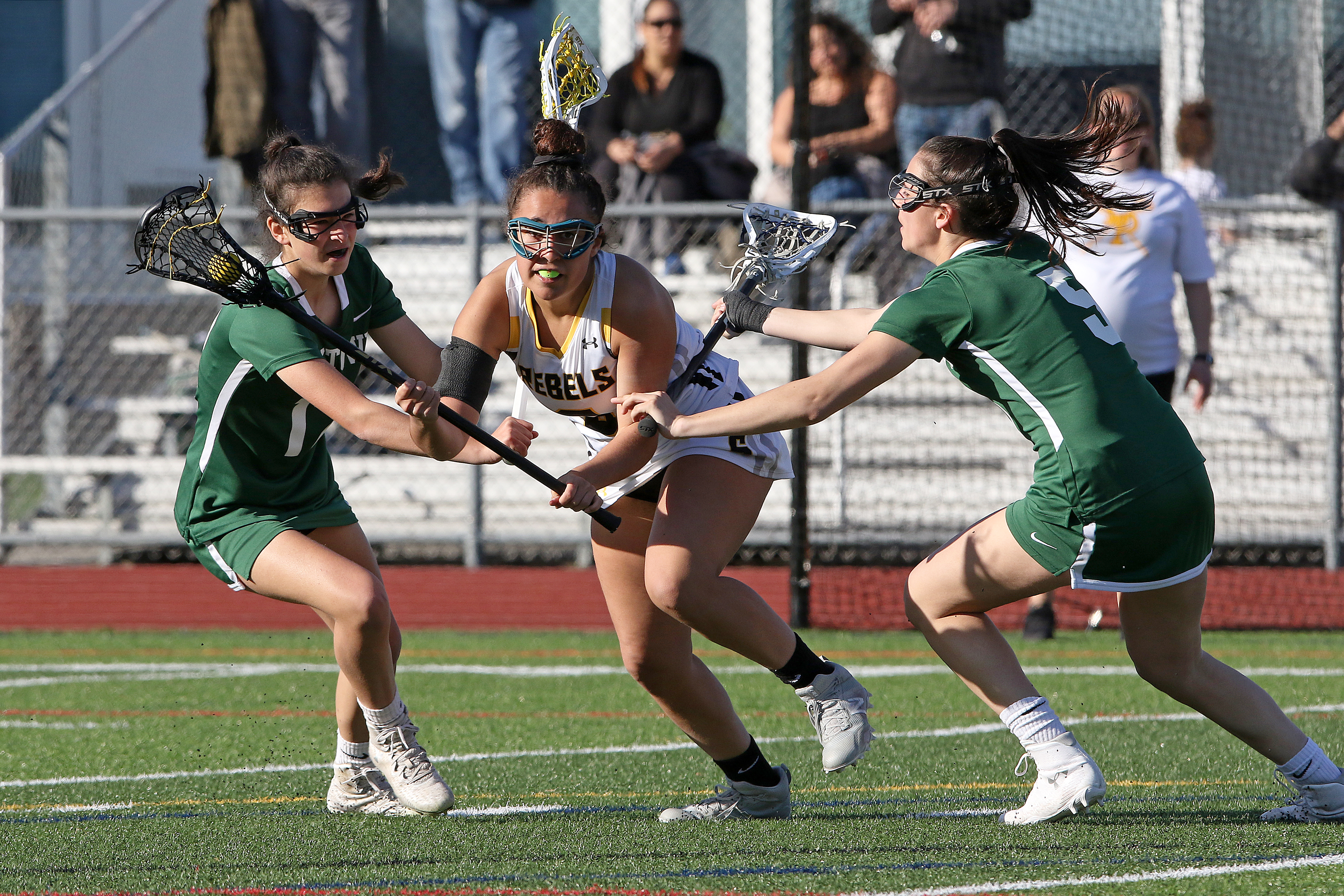 Lakeland-Panas’ Emily Kness tries to split the defense of Yorktown’s Jessie Barer and Sophia Spallone in Rebels’ 15-4 loss to Huskers.

Preseason can sometimes be a tedious, everlasting time for teams in preparation for the new spring sports’ season. Depending on the unpredictable weather in the northeast and field conditions, pre-season practice for spring sports often lead to numerous indoor practices where only so much can be accomplished. The HEN HUD varsity girls’ lacrosse team embraced preseason because the Sailors were welcoming many new players to the 2018 Section 1 Class C finalist team.

“Preseason was a time for the new players to become acquainted with the returning team and for everyone to become familiar with each other and bond,” said Captain Haley Merchant. “With so many new players being brought up, it was a chance for everyone to learn about each other and become closer. We had a long preseason in order to have a solid team already going into the season and the buildup was more than enough to get everyone excited for the season to start.”

While Hen Hud took full advantage of preseason, the returning veterans viewed the loss in the 2018 Section 1 final as a building block

“For the returning players, the disappointing end to the 2018 season was a learning experience that exposed us to the aspects of the game we had to work on,” Merchant said. “We’ve learned to take our faults and turn them into strengths through hard work, dedication and development as a team. I know all the returning players were psyched to start the new season and work to make I the best one yet.”

Hen Hud came into the 2019 season having to replace veteran goalie Mackenzie Porter, a four-year starter and current college freshman playing at Rutgers. Hen Hud also was unveiling a younger defense, anchored by captain Erin Clark. Merchant and her fellow veteran teammates realized early that the youngsters were going to be good.

“The defense is young this year, but they are all incredible athletes and eager to learn,” Merchant said. “Their energy and excitement for lacrosse made them mature quickly and become very savvy towards the game. Since we are a relatively young team we have open minds about the game and are able to adopt new tactics quickly and easily. The defense and goalies have been working incredibly hard to use these new ideas to our advantage creating a strong and flexible defensive line.”

Clark is joined in the starting backline by classmate Brooke Montgomery and sophomores Maddy O’Hara and Gianna Deak. The goalies are junior Courtney Gallagher and eighth-grader Madison Porter, Mackenzie’s younger sister. Even though Hen Hud lost to Yorktown and Pelham, the Sailors rebounded with this current three-game winning streak. Prior to this, the victory over Suffern, 10-9, made Hen Hud realize its hard work yielded results.

“Suffern is an exceptional program and the victory was a humbling experience for our team,” Merchant said. “It gave us confidence in ourselves and each other, and showed the result of all our hard work.”

Hen Hud Coach Rob Molfetta tested his team with a recent trip to Maryland to play Mount de Sales Academy. Merchant said every girl rose to the occasion in a 13-12 victory.

“The key to any team win lies within the team and the energy we bring to the game,” Merchant said. “This win was critical for our team, possibly more so than Suffern, and we have become more assured in our skill and what we are about to accomplish when we work together.”

As Hen Hud prepares for the second half of the season, the Sailors continue to progress individually and as a team since they convened on the first day of practice. This is exactly what the players and coach strive for.

“I am so impressed with the way the team has grown together,” Merchant said. “I have seen everyone develop their skills and athleticism ten-fold in the span of a few weeks, and it’s truly inspiring to see the difference in play from the start of the season to now. We rise to a new level of play with every game and practice, and the more opportunities to learn, the more we will improve. I’m excited to see where the rest of the season takes us.”

Hen Hud is hoping its final Section 1 destination is the championship game, but this time with a positive result.

Reigning Class C champion BREWSTER came away with two wins, 15-8 over Kingston and 13-12 over Horace Greeley, improving to 6-4 this season.

“We played a solid game against Kingston,” Brewster Coach Sara DiDio said. “All of our players contributed to the win. The girls stayed composed throughout the game and helped to control the tempo of play. Danielle Heintz had some great saves and our offense worked well together to find the back of the net. We came out strong against Greeley, then it started to make a comeback, but we were able to hold them off. Our defense came up with some big stops to secure the win.”

MAHOPAC overcame the cold and rain and a second-half surge by White Plains in an 11-8 victory. Katie McDonough, seemingly back to full health, led Mahopac with four goals, Nicole Panny added three and Sophia DeFrancesco finished with two goals and an assist.

“White Plains is a strong Class A team that we could see again in sectionals,” Mahopac Coach Jim Lieto said. “They didn’t back down, at all, and I am glad we could withstand their run.”

YORKTOWN saw its potent duo OF Jesse Barer and Kelsey McDonnell light up host LAKELAND/PANAS four goals and a 10-save performance by goalie Sophia Altimari, Yorktown won in what evolved into a 15-4 romp. Lindsay Boyle added a hat trick for the Huskers and Ellie O’Donnell and Alexa Borges both had two goals for Yorktown. Emily Kness scored twice for the Rebels.