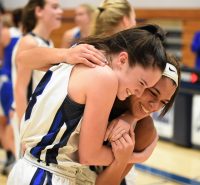 It was a wild post-holiday week of action; that’s all you need to know.

The Panthers won their first six games. Following a week off for the holiday break, Panas opened 2019 riding the momentum wave with two more victories. Panas opened 2019 with a 46-37 victory over Horace Greeley, then turned up the defensive pressure in the second half in a 41-30 victory over previously undefeated YORKTOWN, improving to 8-0. This is among the best starts to a season in program history.

“The team played great defense on a much bigger Horace Greeley team and battled for rebounds all game,” Panas coach Matt Evangelista said.

Cailean Nolan had a game-high 17 points, including four 3-pointers.

Panas trailed Yorktown, 15-11, at the half and 24-20 following the third quarter staved off defeat with a strong fourth for the win.

“We changed the press to create more turnovers and, most importantly, we began to make our shots,” said Evangelista of the second-half surge against Yorktown. “Our man defense was even better in the second half. Julia Araujo played an excellent game guarding much bigger players and scoring all six of her points in the fourth quarter and her free throws iced the game. Kat Reynoso’s defense sparked the team with many steals and timely baskets. Kristen Scrobola battled sickness, foul trouble, and much taller girls to contribute greatly to the win. Alex Sudol, Emma Anderson, Megan Mucci and Erijona Rraci all made solid contributions to the win.”

Nolan led the team with 13 points and Kristen Cinquina added 12 points against the Huskers (5-1). Even with the week off, Panas still approached practice with a determined attitude.

“We knew going into winter break that we were going to have to work hard during our time off because we had a league game on our first day back,” senior Araujo said. “We remained focused and put in work on days that most teams took off.”

Araujo noted that she and her teammates were frazzled and frustrated going into the locker room at halftime against Yorktown. However, the coaches eased the girls’ collective psyche and Panas recalled the resiliency it showed against Mahopac in the fourth quarter of its tournament final.
“Our shots weren’t dropping and we were struggling to get things going on offense,” said Araujo of the first half against Yorktown. “Our coaches calmed us down and told us to play our game and that’s exactly what we came out and did. We made a few adjustments and with a more intensive defense we started to generate more offense and secure the win. Our early-season win against Mahopac definitely helped us mentally. It made us realize that we are a team that is more than capable of coming together, even at the last second, to work hard to come back from behind and win games.”

In the loss to Panas, Yorktown’s Ashley Zeolla had a monster game with 20 points and 21 rebounds. Jesse Barer added eight points.

“The girls came out and executed the game plan exactly the way we talked about it,” Yorktown Coach Brian Mundy said. “We played aggressive defensively, and controlled the boards. But we had too many untimely turnovers. We were effective in the paint, offensively, but didn’t shoot well, like we have been. Panas did a good job of taking care of the ball. Even though we protected the perimeter, the threes they did hit late in the game were deep and came during a key run they made.”

Despite the loss, Mundy was impressed with the atmosphere at Yorktown for the game between two undefeated teams.

“We had an awesome crowd,” Mundy said. “They packed the gym to see two very good basketball teams battle it out. It’s great to see the support from the community, especially all the YAC kids that showed up to support the girls. It means a lot to them.”

SOMERS defeated LAKELAND, 52-35, and won overcame BREWSTER, in overtime, 52-50, on a Dani DiCintio 3-ponter in the waning seconds.

Meagan Beal converted a layup with 15 seconds remaining in overtime, giving Brewster a 50-49 lead. DiCintio took the in-bounds’ pass, raced down court and swished a straight-on 25-footer from beyond the top of the arc.

“It was honestly as wild of a game as I’ve ever coached,” Somers Coach Marc Hattem said. “Coach (Mike) Castaldo had his girls ready to play and they played great. I wouldn’t be surprised to see them make a deep run this year. It’s a shame someone had to lose. Maggie DePaoli and Meagan Beal were awesome, but Dani did her thing in the end.”

“This was a back-and-forth game from the second quarter on,” Brewster Coach Mike Castaldo said. “We did a great job of contesting three and forcing tough twos. Somers was in foul trouble all night. We led by as many as eight in the fourth quarter, but Somers(7-1) had an and-1 and a three in two straight possessions, which gave them a ton of momentum.”

Castaldo said Galgano gave Brewster (6-4) a 46-45 lead with seven seconds remaining in regulation, but DiCintio did a great job of pushing the ball, getting a shot off and a foul was called. DiCintio converted one of two free throws to force overtime.

HEN HUD snapped a two-game skid and evened its record at 4-4 with a 58-42 win over Peekskill as Caitlin Weimar had 23 points, 21 rebounds and eight blocked shots.

Hen Hud trailed by four after the first quarter, but outscored Peekskill, 17-2, in the second quarter.

“Peekskill got off to a great start shooting the ball extremely well from the three, but I was proud of the way we took the punch and fought back hard in the second quarter, holding them to only two points in that quarter,” Hen Hud Coach Ken Sherman said. “We didn’t change anything up defensively, but the main difference was our defensive rebounding. We did a much better job on the boards in the second quarter.”

“When Grace plays well the whole team plays better,” Sherman said. “We move the ball better and we shoot the ball better because we get more open looks. She also went to the basket really well. Grace grew as a player against Peekskill.”

PUTNAM VALLEY remained undefeated, 8-0 and ranked No.14 in NYS Class B, with a thrilling 35-33 victory over Class AA MAHOPAC as junior G Cyera Daughtry (6 points) slipped a double-team, drove the ball along the baseline and hit the decisive basket in the final second. A back-and-forth affair, the game featured a ton of defense and physicality.

“After a long break we snuck away with the win on a big Cyera Daughtry bucket against super-tough Mahopac squad,” PV Coach Kristi Dini said. “We have a lot to work on and clean up, but I’m proud of this group for bringing energy and focus to every practice and game.”

Kelli Venezia led the Tigers with 13 points. Mahopac (2-9) is chock-full-of-youth and better than its record would indicate. Indian sophomore F Caitlyn O’Boyle scored 11 points, including game-tying 3-pointer with 3.3 seconds remaining to even the score at 33-33.

“Putnam Valley advances the ball, runs their play and scores on a baseline drive,” Mahopac Coach Chuck Soczzafava said. “We played a solid game and our defense stepped up. Hopefully, we can build off of this game and make a push to get to the sectionals.”

OSSINING dropped a 91-50 verdict to Christ the King in the Crusader Classic at the Westchester County Center.

The short-handed Pride (8-3) trailed 27-19 after the first quarter, but Christ the King outscored Ossining by 14 in the second quarter to seize command of the game.

Coaches please send results and comments to tfinch23@optonline.net for inclusion in our weekly notebook.