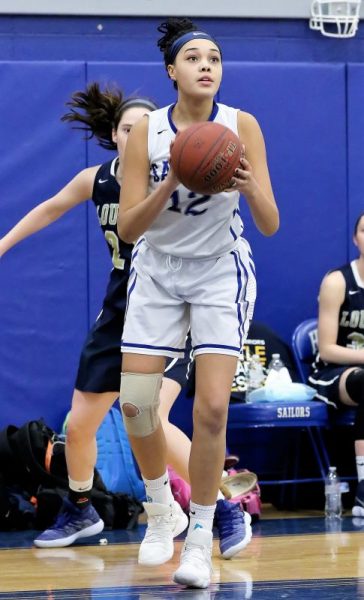 Hen Hud senior Caitlin Weimar should set fire to Sailor record books this winter before heading to Marist next fall.

The OSSINING uniforms and team colors have not changed, but it will be a new-look Pride girls’ varsity basketball team for the 2019-20 season. Throughout the last decade, Ossining and veteran Coach Dan Ricci have had one of the best or best players in Section 1 on its roster from Saniya Chong to Shadeen Saumels to Andra Espinoza-Hunter to, most recently, Aubrey Griffin, Kailah Hunter and Jaida Strippoli.

The Griffin-Hunter-Strippoli triumvirate had an outstanding career, leading Ossining to yet another Section 1 Class AA and State title last year. Griffin is a freshman at UCONN while Hunter has joined Samuels at Seton Hall and Strippoli is playing at West Point.

“This is the first year in the last decade that I don’t feel we have the best player in the section,” said Ricci, in his 29th year and owner of 500 varsity victories.

Despite this, Ricci is confident in his team’s collective ability.

“One of our strengths is depth,” Ricci said. “There is not much separation between player one through 14. We will be as good as our work ethic takes us.”

One thing Ricci can count on is his team’s annual determined work ethic. Seniors Julia Iorio (guard) and Adriana McFadden (forward) will lead the Pride this season. The returning seniors will be joined by a pair of sophomore newcomers to varsity — Michelle Mercado and Katie Marx, both guards.

Ossining opened the season, today, against fellow Section 1 Class AA power, Mount Vernon. The Pride will have an adventurous December, travelling to Virginia for a tournament then making its annual trip to Orlando, Fla., for a prestigious tournament.

In her first three years coaching her alma mater, Kristi Dini has transformed PUTNAM VALLEY into a rising power. Putnam Valley went 20-2 last year, won a league title and was on its way to a sectional-final matchup with Irvington, but was upset by Woodlands in the Section 1 Class B quarterfinal round.

“Kelli is a big-time guard who can score different ways and is a lock-down defender,” said Dini, the former Putnam Valley basketball and field hockey great. “Arianna plays inside and outside and is also a big time defender.”

The Venezia-Stockiner tandem will be joined by a core of underclassmen.

“We have some young talent returning from last year that are going to surprise people now that they’re a year older and had an off-season full of hoops under their belt,” said Dini, who starred at Boston University.

One aspect Putnam Valley has become known for under Dini is its suffocating defense. Defense will again be Putnam Valley’s strength, and that start with senior G Cyera Daughtry. Dini noted that her team is dealing with several injuries early on, but underclassmen Eva DeChent and Amanda Orlando will start. Depth is an issue the Tigers will have to overcome.

“Our strength has always been our man-to-man D and our guard play,” Dini said. “We have several big injuries this year, including two season-ending so we have changed some things around.

“We have more scoring options this year and just need to play together and we will be in good shape.”

Dini has upgraded the schedule as Putnam Valley will play Ursuline, Arlington, Irvington, Hastings and Dobbs Ferry, as well as participating in the Harrison and Lakeland tournaments.

SOMERS was once again among the Section 1 elite in Class A last year. The 2018 Section 1 Class A champions returned to the Westchester County Center for the final four, last year, in Coach Marc Hattem’s third year. The Tuskers were in line for another sectional title, but Tappan Zee emerged with the upset in the championship game.

The Tuskers graduated two starters, including all-section player Hannah Angelini, who is playing at Scranton. The Tuskers do return a veteran senior nucleus of Dani DiCintio, Emily Arena, Pooja Rao and Jordan May, as well as junior Taylor Penzo.

Hattem welcomes three freshmen to varsity in Ava Giudice and Lauren McCartin, Alexa Warycha. Senior Alexis Atkinson returns to the court after last playing as a freshman. Hattem pointed out Atkinson is committed to Iona for soccer.

Somers, like Putnam Valley, is battling the injury bug. Hattem said he has yet to have the full team together because of injuries. He anticipates mid-to-late December before the team is whole again.

“Hopefully, we will have our rotation set by January,” Hattem said. “In all my years of coaching I have never been hit as hard by injuries and kids missing time. A strength is our experience from making deep runs in sectionals the last few years.”

Somers has its season-opener, tomorrow, against Rye. The Tuskers will be heading to Amsterdam (N.Y.) for its holiday tournament. The field includes Shenedehowa (Section 2) and Curtis (Publi School Athletic League).

WALTER PANAS has gone unnoticed in Northern Westchester and Putnam with the success of Ossining, Somers and Putnam Valley, in recent years. However, last year, the Panthers emerged as a sectional contender and appear to continue this year.

Panas finished with a program-best 19-4 record and advanced to the Section 1 Class A final four at the Westchester County Center. Even though the Panthers lost to Somers, it did not deter from what they accomplished. Coach Matt Evangelista returns everyone from last year, except for excellent all-around player Julia Araujo.

“The strength of our team will be our experience as we are returning 11 players from last year’s 19-4 County Center team,” said Evangelista, in his ninth year. “We should be an excellent outside shooting team that is athletic and can defend well.

“We have limited size and could affect how we rebound the ball. We will also have to replace a player, Julia, that led the team in every category except scoring (rebounds, assists, steals, charges etc.) from last year. It is going to take more than one player to make up for her contributions.  Also, our schedule has many tough teams on it both in, and out, of our league.”

Evanglista set up a difficult schedule for his team, which he hopes will prepare the Panthers for the postseason and also will result in a league title.

Pelham will host Panas, Wednesday, 12/4, in the season-opener for both teams.

The Hornets had a strong second half of the 2018-19 season, qualified for sectionals and earned an out-bracket win over Saunders. Lakeland lost to third-seeded Byram Hills in a quarterfinal game.

Lakeland will look to carry the momentum from the second half of last year into the 2019-20 season. The Hornets enter the season with a deep veteran core highlighted by seniors Brianna Monte (forward), Sofia Portante (guard) and Megan Jennings (guard).

“We return a core group of players that saw a lot of action last season, mixed with talented youth,” Mangan said. “We hope to have a balanced scoring attack and use our versatility on defense to make up for our lack of size.”

HEN HUD continued progressing under the guidance of Coach Ken Sherman last year. The Sailors finished with a 12-10 record, were league champions and won a first-round sectional game.

Hen Hud has one of the top players in Section 1 in Marist-bound senior center Caitlin Weimar, who is fresh off an excellent volleyball season. Weimar, who will attend Marist next fall and play basketball, and her volleyball teammates advanced to the state final four.

“Obviously, Caitlin is a big strength of ours as she averaged double-doubles last year in points and rebounds,” said Sherman, in his 11th year.

A new era will debut at BREWSTER this season as the Bears graduated all-everything Maggie DePaoli and Meagan Beal in June.

DePaoli was a four-year starter and surpassed 1,000 varsity points and Beal started three years. Beal is playing lacrosse at Furman.

The duo led Brewster to an 11-11 record and a sectional berth.
Coach Mike Castaldo, in his eighth year, will turn to his returning quartet of juniors Carly DeLanoy (guard) and Alexis Mark (forward) and sophomores Grace Galgano (center) and Madison Dakin (guard/forward) to lead the team. Sophomores and guards Sophia Alzuguray and Adrianna Calicchia join varsity.

“Our strengths are we are a big, physical team that can shoot well,” Castaldo said. “We are very young and probably won’t start one senior.”

Brewster played Beacon in its season-opener, Tuesday. The Bears will host their annual tournament, 12/12-12/13.

Youth will be served for PEEKSKILL and Coach Jaycee DeGroat this season.

The starting lineup will features three sophomores, a seventh-grader and one senior. Senior Krista Godbee and Jaiana McGriff will be the leaders of this young team. Last year, Peekskill finished with a 9-11 record and qualified for sectionals.

Junior Shaynna Sessions (guard/forward) and Sage North (guard) will come off the bench along with McGriff.

“We are very excited to watch the growth of our players,” DeGroat said. “We are a very young and inexperienced team with a lot of potential. We ned to keep working hard and focus on details. We believe if we can come together and trust one another, we will open a lot of eyes in Section 1.”

CARMEL welcomes John Sullivan as its new coach. Sullivan inherits a team that went 6-15 last year. Carmel qualified for sectionals and lost in the first round.

The Rams graduated Khadijah Johnson and Claire Cody, who made the St. Bonaventure team as a walk-on.

“We have good size inside and some good shooters,” Sullivan said. “As a new coach I hope to change the mindset of the girls in my program. Push them to have that competitive confidence, that they can each alter a tough situation and turn it into team success. The girls are motivated to obtain our goals for this season, not just as a sendoff for the six seniors, but to jumpstart the program back to relevance!”

Coach Brian Mundy had a successful first season at YORKTOWN, guiding the team to a 13-8 record and Section 1 Class A berth. Yorktown did graduate four seniors, including two starters, one of whom was Kat Severino.

Some of the new players to varsity include junior Alyssa Perrino (forward), sophomores Erisa Krasniqi and Artesa Gashi, both forwards, and freshman Emily Ward (guard).

“Our strengths are chemistry, teamwork, rebounding, defense and our inside play,” Mundy said. “We have great leadership from senior captain Jesse Barer. We have game-by-game goals and whatever happens from there happens.”

Yorktown will host Beacon, Thursday, in a first-round game of its annual George Budries Tournament.

MAHOPAC is aiming to overturn its record from last year – 7-14 – and Coach Chuck Scozzafava is positive it can be done.

“I feel we have an athletic team, with improved outside shooting,” said the seventh-year coach. “I like how the girls are working hard and working together.

“We’re always looking to continue to get better during the season, win the league, and go deep into sectionals.”