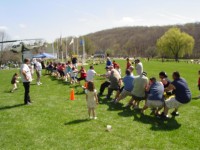 Putnam County Council of Veterans of Foreign Wars is inviting families from throughout Putnam County to attend a Loyalty Day Jamboree, featuring food, music and fun competition from 11 a.m. to 4 p.m. this Sunday April 29 at Veterans Memorial Park on Gypsy Trail Road in Carmel.

First recognized at American Invasion Day, Loyalty Day was established as a counterpoint to May Day celebrations in Communist nations in order to highlight America’s democracy.

“It’s not just a function for veterans and their families. It’s for everyone in the community come out and celebrate what American is all about,” said Art Hanley, who served with the U.S. Army in the Vietnam War and who is the outgoing commander of the county council and the post commander of VFW Post 672 in Brewster.

The celebration will begin with a parade and some brief remarks, followed by lots of fun, including a DJ, hamburgers and hotdogs on the grill, beverages, and a bunch of old fashioned picnic games like hoola-hoop, 3-legged race, sack races and the wheelbarrow, with prizes for teams who come out on top.

“Enjoying their freedoms is free!” Hanley joked, about the no-cost invitation to the community.