A White Plains man will have to surrender his teaching license and register as a sex offender after sexually abusing and raping a student on more than one occasion last year. 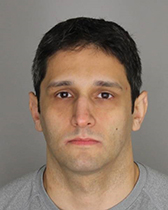 John Fraioli, 36, on Tuesday pleaded guilty to criminal sexual act in the third degree and one count of rape in the third degree, both class E felonies. The child victim was a student at New Rochelle High School where Fraioli had been employed as a teacher, according the Westchester County District Attorney’s Office.

He must also surrender his New York State teaching license and register as a sex offender.

Fraioli was initially arrested in May by New Rochelle Police after engaging in a sexual act with the victim in the school building, the District Attorney’s Office said. He later continued to abuse the victim in his White Plains home and was then arrested by White Plains Police in November. Fraioli resigned from his teaching position prior to his arrest, officials said.

His sentencing is scheduled for Jan. 21.