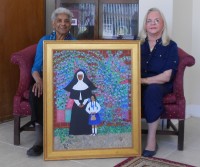 Greenburgh resident and former Westchester County Legislator, as well as BOL chair, Lois Bronz was born and raised in New Orleans, Louisiana. Her humble beginnings and future rise to public fame in a New York City suburb are filled with many an adventurous tale.

Reflecting back on her roots, Bronz began work on an autobiographical novel with her long time friend, White Plains resident and painter Mary Ann Berry.

The stories Bronz told her friend portrayed a life that was not easy. One story in particular was quite startling and so moved Berry that she felt compelled to illustrate it with a painting.

As a young girl Bronz attended Saint Mary’s Academy in the French Quarter of New Orleans. Living and working with little means, it was necessary for the Sisters of the Holy Family who ran the school to beg in the streets. Thinking that the presence of a young girl accompanying them would be most appealing, the sisters would take a student out with them to solicit funds.

Bronz was designated Sr. Celestine’s appointed child and every day, after school, she would accompany the sister to collect money for the nuns and the school. Bronz’s sisters teased her and called her “Sister Celestine’s little beggar girl.” Bronz was only nine years old at the time.

Berry painted a small piece for Bronz, depicting the nun and her student companion. The piece was titled “Sr. Celestine’s Beggar.”

As Bronz, gratefully accepted Berry’s gift, she became aware that Sister Henriette Delille, founder of Sisters of the Holy Family in 1842, is a candidate for sainthood in the Roman Catholic Church.

Bronz commissioned Berry to do another painting of Sister Celestine’s Beggar to present to the Sisters of the Holy Family, in honor of Sister Henriette’s prayerfully, forthcoming sainthood.

The two women, along with Bronz’s daughter, Francine Taplin Shorts, recently visited the convent in New Orleans, now an expansive campus, to present the painting. They were welcomed by nuns who remembered Sr. Celestine. The painting now adorns a convent wall and Bronz’s presence there so many years ago, has become a permanent part of the order’s history.