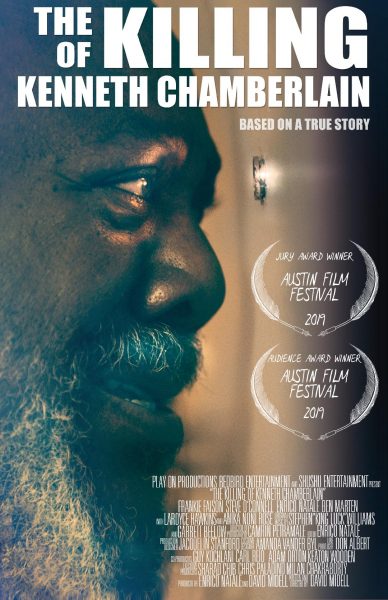 A poster for “The Killing of Kenneth Chamberlain,” which recently won two top honors at the Austin Film Festival. Frankie Faison portrayed the title character.

The shooting of Kenneth Chamberlain Jr. on Nov. 19, 2011 in White Plains dominated local news at the time.

Today, the story about the circumstances surrounding the retired Marine’s death will have an opportunity to reach a national audience through the feature film “The Killing of Kenneth Chamberlain,” which was written and directed by David Midell.

The film relates the attempts by White Plains police to subdue Chamberlain, 68, who had bi-polar disorder. He was fatally shot during response to a medical emergency call at his apartment in the Winbrook Housing complex. A grand jury in 2012 reviewed the case and declined to bring charges against the White Plain police.

Kenneth Chamberlain, Jr., as administrator to the estate of Kenneth Chamberlain Sr., determined there was nothing he could see to encourage the dozen officers responding to take the actions they did that resulted in his father’s fatal shooting.

The Chamberlain estate filed a $21 million wrongful death lawsuit against the City of White Plains but a federal jury rejected it. The decision is under appeal.

Prior to the start of his filmmaking career Midell worked as a teacher and therapist in disadvantaged areas of Chicago.

Midell, who lives in California, said last week he was researching incidents related to similar circumstances when he learned about the killing of Chamberlain. “Kenneth Chamberlain was one I had not heard of,” Midell said.

The Chamberlain family has been intimately involved throughout the process of creating the film since pre-production began, Midell said. “I wanted to make sure they were comfortable with the film,” he said.

Midell said he wanted to create a film that was not exploitative, but which had empathy for those involved in the White Plains incident. “Everything has shades of grey,” he said.

Midell began working on the film in 2015 and completed shooting the movie in an area just outside Chicago and he finished post-production work in mid-2019. In terms of the time frame, “That’s about average for a film,” he said.

Midell said audiences were emotionally involved while watching his film with sniffles that could be heard at the end of the movie. The movie provoked discussion during the subsequent question and answer sessions.

Since its premiere at the film festival, Midell said he has received several financial offers. Midell said he is open having the film released theatrically and streamed.

Midell said he was particularly gratified by winning the top prizes at the festival, which featured movies with larger budgets and more famous actors.

“This has been a wonderful experience,” Midell said. “We hope this film encourages conversation.”

Chamberlain reacted to the success of the film last week. “This movie has already surpassed my expectations,” he said. “My family and I were thrilled to know that it received two top awards at the Austin Film Festival without even having a ton of buzz around it. I hope that this movie will force discussion around the issue of police misconduct, brutality and criminality and I cannot wait until we’re able to show the film locally in Westchester County.”