Skip to content
The Examiner
August 28, 2020August 31, 2020 Examiner Media Mount Kisco
We are part of The Trust Project

Hundreds of families lined up in Mount Kisco on Thursday to collect more than 27,000 pounds of fresh produce that was distributed, highlighting the growing hunger in communities throughout the county.

Feeding Westchester partnered with Stop & Shop and Neighbors Link for the latest summer fresh market outside Mount Kisco Elementary School as more than 500 families walked or drove up to receive packages.

“We’re doing over two million pounds (of food) a month,” said Judy Campisi, interim vice president of development for Feeding Westchester. “In normal times it ranges from 800 (thousand) to a million pounds a month so we’re distributing twice as much food since COVID than we have typically done.”

Through the five fresh markets across Westchester County, Feeding Westchester has reached more than two-and-a-half times as many households than last year, Campisi said. Last summer, the Elmsford-based organization served clients 20,533 times through the fresh market program; this summer, that number has soared to more than 52,000.

The increased food insecurity prompted Feeding Westchester to reach out to organizations such as Neighbors Link across the county that are in touch with the people they serve in their communities.

Before the pandemic, Neighbors Link, which provides services to the immigrant community in Mount Kisco and elsewhere in Westchester, did not distribute food. But they listened to the concerns of their community over the past few months and responded.

Neighbors Link has distributed food at its center on Saturdays, said Martha Palomino, volunteer coordinator for Neighbors Link. She said the partnership with Feeding Westchester guaranteed credibility to the people they serve.

“We have been in the community for almost 20 years offering a lot of programming for the integration of immigrants; that is the core of our mission,” Palomino said. “And so people recognize us as a productive partner and clients, those we serve, trust us.”

In addition to Neighbors Link, Feeding Westchester partnered with Stop & Shop, which donated 10,000 pounds of produce from New York farmers. Some of the produce included was green and yellow squash, green peppers, cucumbers, eggplant, romaine leaf lettuce, corn and peaches.

“As a grocery store that supports many communities across Westchester, we know how important it is that people and families remain fed and being able to offer fresh produce to those who are maybe facing a little bit of food insecurity or are currently dealing with financial troubles, we know that it’s really important to be able to give back to the community,” said Maura O’Brien, manager of external communications and community relations at Stop & Shop.

Events like the fresh market in Mount Kisco identify the food insecurity that residents are facing within the community that others might not have recognized as a problem before the pandemic.

Neighbors Link volunteer Gary Cohn talked about how the organization’s volunteers come out because there is such great need. Some volunteers travel from more than a half-hour because the effort is worth it.

“I think for a lot of people, like the people that drive by, it’s taking the blinders off that even in their own community there is significant need,” Cohn said.

The Feeding Westchester fresh markets will continue into the fall, but won’t be held as frequently during the week, Campisi said. 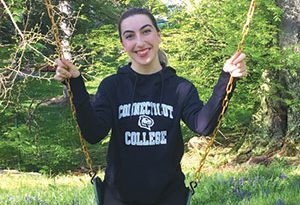