Skip to content
Education Other News
June 15, 2022June 15, 2022 Examiner Media Armonk, Chappaqua
We are part of The Trust Project

Both women, involved members of their community, created a curriculum and reached out to principals and guidance counselors to launch Spiral Giving.

“We want teens to develop a lifelong practice of philanthropic thinking,” said Fuirst, who along with Gerstein is helping students to recognize that they can make a meaningful difference when they support those in need.

Fuirst and Gerstein, work directly with students so they can develop an understanding of Westchester’s nonprofit community.

Students participating in Spiral Giving are encouraged to identify organizations within Westchester that would benefit from grants. They learn to request and evaluate grant proposals and to fund mini-grants based on the submitted proposals. Through these efforts, Fuirst and Gerstein are advocating for students and for those in need within Westchester.

Since Fuirst and Gerstein launched Spiral Giving, the charitable foundation has awarded at least 38 grants, donating more than $35,000 to Westchester-based nonprofit organizations.

“We want our students to know that by giving back locally they have a big effect, and these teens are capable of doing so much,” Gerstein said.

In addition to requesting and evaluating grant proposals, students are responsible for helping to fund the grants, hosting bake sales, getting the word out about Spiral Giving’s objectives and partnering with businesses that donate a portion of sales to charities.

Aidan Aldea-Lustig, a leader in Byram Hills’ chapter of Spiral Giving, said his chapter addressed how many people in Westchester are food insecure, homeless or in need of assistance in some other way.

“We discussed how to raise money for those that need help,” Aldea-Lustig said. “Through bake sales, fundraisers and donations sought out outside of a grocery store, we learned about how to achieve our goal of raising money for the grant-awarding process.”

Fuirst and Gerstein believe that Spiral Giving is different from other groups because it motivates students to dive deeper into causes that interest them. Students involved in Spiral Giving learn to advocate for issues that they find meaningful.

“I feel that the biggest contribution that I made was spreading information about the need in our area,” Aldea-Lustig said.

“We want to enable teens to see and recognize the community that doesn’t have access to many resources,” Fuirst said.

Charlotte Brodbeck, another Byram Hills Spiral Giving chapter leader, said that she has learned “to advocate for those in need within our community.”

“Not only have I been able to experience what youth philanthropy means, but I have also grasped an understanding of the grant application process,” she said.

Brodbeck is also proud that she has developed skills that will help her to be an advocate in a wide array of situations. Fuirst and Gerstein taught students about elevator pitches and the importance of spreading awareness about causes that are important to them.

Fuirst and Gerstein, who have contributed to multiple nonprofits throughout Westchester County, including the Open Door Foundation, The Pleasantville Cottage School and Impact100, are hoping to expand the reach of Spiral Giving next September by creating a centralized program within the county. Rather than having Spiral Giving chapters in a few school districts, they hope to encourage students throughout Westchester to apply, participate and learn to advocate for those in need.

“We’re excited to expand the program and recruit students from all over Westchester,” Fuirst said. “There are many local nonprofits and some communities have one or two they feel connected to. It will be great to see how the students share ideas and discuss priorities.”

For more information about Spiral Giving, including how to apply or to donate to future grants, visit www.spiralgiving.org. 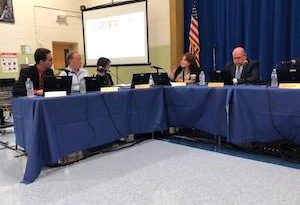 Carmel Board of Education Moves Meetings to New Location