When Oren Shapiro founded Mrs. Bloom’s Direct during his lunch hour at a Manhattan law firm in 2003, he always knew he wanted to give back to those in need.

The Elmsford businessowner hopes to brighten the recipients’ day while supporting those who need help.

“Flowers convey affection, appreciation and caring to those who give and receive them,” Shapiro said. “Our hope is that the PETALZ program will become a sought-after amenity so that together we can raise significant funds for a larger cause – the fight against Alzheimer’s.”

Shapiro said he launched the program specifically for owners and operators of nursing homes, assisted living facilities and memory care centers to help residents overcome feelings over isolation made worse by the pandemic. For as low as $10 per week per resident, communities can receive a variety of fresh flowers from growers worldwide, he said.

Mrs. Bloom’s imports flowers from every continent except Antarctica.

“They could have flowers every single week in their rooms,” Shapiro said. “So, we think it’s a really small price to pay for flowers because we think it’s a program that they will really be looking forward to from week to week.”

The flowers are delivered directly to the facility via FedEx and each resident would receive a complementary vase and clippers. Depending on the level of participation, the facility could also be eligible for flowers for its welcome area, dining room and other common spaces.

The idea to partner with the Alzheimer’s Association stemmed from Shapiro’s personal experience with the disease. After witnessing his neighbor suffer from Alzheimer’s, he researched how much support those diagnosed needed.

Shapiro and his brother, Ari, eventually reached out to the Alzheimer’s Association to pitch PETALZ.

“In keeping with just giving back, what better cause is there than Alzheimer’s,” Shapiro said. “It is a malady of unbelievable proportions and only getting worse.”

Senior living communities are a great focus for the PETALZ program because of the number of residents, he said. Shapiro explained that there is the potential to raise millions of dollars for Alzheimer’s research through the national program.

“We think that there is certainly an opportunity for residents to include this new amenity into the overall services that they provide and if they wanted to increase their costs just slightly,” Shapiro said. “We certainly think that the vast majority of families would approve of it.

With the pandemic making it more difficult for seniors to have visitors, isolation has taken a toll on residents, Shapiro said. He added that research indicates flowers make people happier, makes them more social and can help improve cognition in the elderly.

While Shapiro has been told that it’s a bad time to roll out the PETALZ program because of the pandemic, he hopes that the delivery of just one flower can make a person’s day brighter.

“It’s the most important time to start something like this because of the isolation issue that many of them are facing,” Shapiro said. “What better way to say thank you and hey, we’re thinking about you, than making sure the residents receive beautiful flowers every week in their rooms.”

To learn more about the program, visit www.petalz-flowers.com. 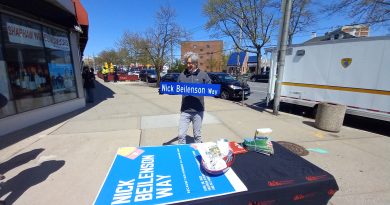