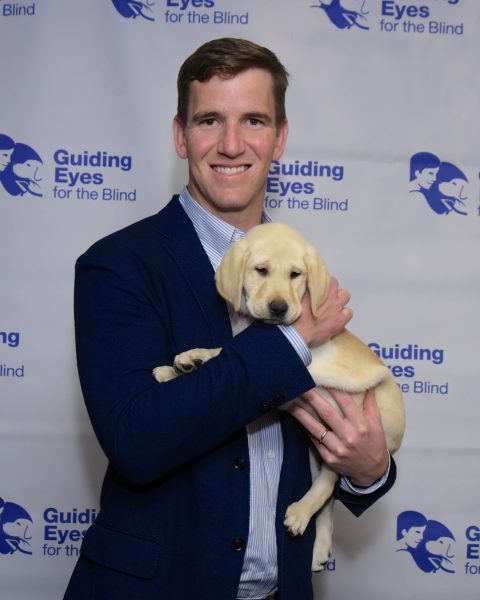 For at least one evening, football was not the subject of discussion for New York Giants quarterback Eli Manning.

Guiding Eyes for the Blind (GEB), a non-profit that trains and provides guide dogs to individuals with vision loss, welcomed the return of the two-time Super Bowl MVP player to White Plains at Mulino’s of Westchester. This was the first event leading into the 42nd annual golf classic, which will take place at the Mount Kisco Country Club on June 10.

Manning, who was introduced to Guiding Eyes by family friend Patrick Browne Jr., is now in his thirteenth year of affiliation with the organization because of its life-changing services.

Last Monday, Manning was also joined by staff, sponsors, graduates (of the program) and dogs at the sponsor-recognition party.

One of the present graduates was Barbara Henning, who turned to Guiding Eyes for a guide dog, back in 1994, to help her gain the confidence and live the independent life she currently has.

“I’ve always been really touched by them. The first time I walked in their school was the last time I felt disabled and it’s because they accepted me where I was and they didn’t look at me like I had this deformity,” Henning said. “This is the first place I’d ever felt like I was a whole person.”

Henning not only recognized the efforts and contributions of GEB, but she also acknowledged her three previous guide dogs, as well as current one, Chad, who have all made a considerable difference in her life.

“With a mobility cane, I was a lot slower when traveling because I had to be careful with every step. But with a dog, they see what’s ahead, they see all the obstacles, and they’re dodging them. So it’s a lot better,” she said.

Guiding Eyes depends on its dedicated volunteers and trainers to provide Henning and 170 other people annually with guide dogs. Home socializers start the training process early, as the dogs are typically six to eight weeks old when their training starts. For three days, they learn basic house manners and are provided socialization to new sights, sounds, and people, said Samantha Lockwood, an employee at the GEB Canine Development Center.

For Lockwood, who has worked at Guiding Eyes for the Blind for the past three years, being a part of the organization is a no-brainer.

“It’s amazing because you just see how much these people’s lives have changed because of our dogs and that make’s it so worth it for all of us.”