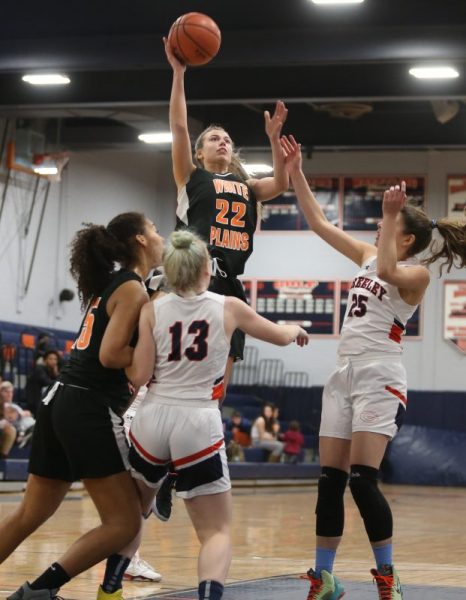 “I’ve been challenging her,” Carter said. “Also, I think with our weight room, she’s been buying in. I told her, sometimes when you get stronger it builds your confidence and you can do more things. You’re going against older girls and you being an eighth-grader, you have to get stronger. She said, ‘You know what coach, I realized after that last game that I can do more and I’ve got to stop holding myself back.’ Once she made that statement, you saw things had changed for her.”

They sure changed when Layne scored a career-high 17 points and grabbed 10 rebounds in a 66-30 rout of host Horace Greeley last Thursday evening.

Greeley was celebrating its senior night and had a lengthy pregame ceremony. The Quakers came out with intensity, taking a 14-11 lead after one quarter against a lethargic Tiger squad.

White Plains came to life in the second quarter. Senior sharpshooter Julia Reggio started the scoring barrage, followed by India Newman to give the Tigers their first lead since the opening minute of the game.

“Even though I felt we were the better team, we couldn’t take them lightly because they’ve played us hard before,” Carter said. “We have to treat them like they’re a team of a high caliber because anything can happen and it could not go our way like it did at Fox Lane. That timeout, I had to say a couple things to them to get them going and to get out of their laid back style.” 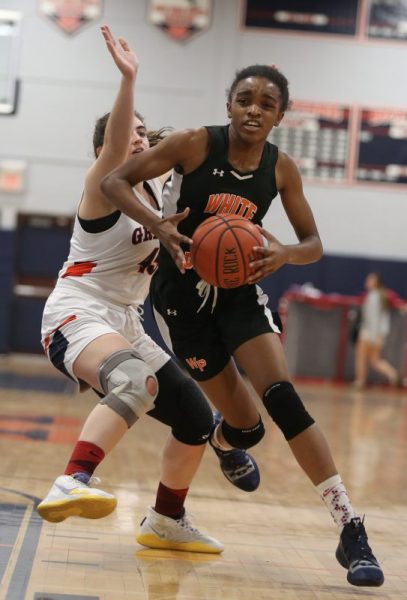 Layne scored the next three baskets inside to make it 21-14 Tigers, prompting a Greeley timeout. Savannah Williams finished on a perfect pass from Ineivi Plata to cap off a 12-0 run midway through the second quarter.

Plata spun and scored with 38 seconds left to send White Plains into halftime with a 32-18 lead.

The Tigers erupted in the third quarter, outscoring the Quakers 22-10 to take a commanding 54-28 lead into the final quarter. Reggio scored five straight points late in the quarter, followed by four consecutive points from freshman Aliya McIver, including a putback on her own missed free throw.

Perimeter shots weren’t falling for the Tigers throughout the game, so they focused on attacking the basket, finishing inside and getting to the foul line.

“I always tell them that if you miss your first two your next five have to be layups,” Carter said. “We did a lot of shooting yesterday. But when the jump shot isn’t falling, it’s good for them to start attacking as they started doing. That’s who we are.”

It’s a Tiger team that goes deep into the bench and doesn’t miss a beat.

“Everybody understands their role and we have different skill sets,” Carter noted. “If we can hit our perimeter shots as we talked about, it’s going to be harder for teams to guard us. Being able to get deep (into the bench) like that, it just throws teams off. It’s just a matter of us being on point mentally and physically.”

“We’re looking forward to the Ossining game because we felt like we gave that game away,” Carter said of the first meeting with the Pride, which they lost 63-48 on the road back on Jan. 29. “We let them out-hustle us and outthink us. We’re ready for them.”