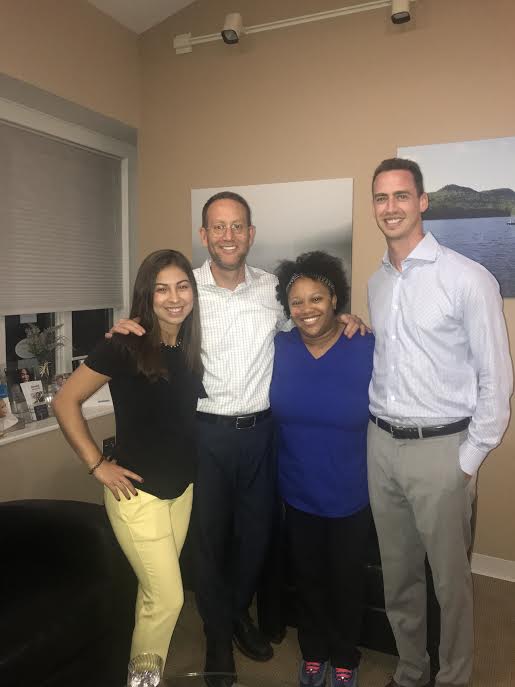 Dr. Scott Schwartz (far right) recently took ownership of the dental practice on Baltic Place in Croton. Also shown above from the left are hygienist Delsi Barrera, Dr. Bard Levey, who will be leaving the practice in a few weeks, and office manager Jasmine Bost.

White Plains resident Dr. Scott Schwartz has been leading a dental practice in transition in Croton-on-Hudson.

The practice on Baltic Place had been owned by Dr. Bard Levey for about 20 years, Schwartz said recently. Levey is planning to leave the area and for the past two months they have been working together on the ownership transition. Levey has helped him in such areas as teaching him about the area and an open house was held recently to introduce Schwartz to Levey’s patients and give them a chance to say goodbye to Levey, Schwartz said.

Levey will stay for a few more weeks and then become a professor at the University of Tennessee, Schwartz said.

One of the first things Schwartz did in his new practice was to send out letters and e-mails about the transition. Schwartz added the practice’s Instagram and Web site are being updated. Schwartz’s personal Instagram account is The Tooth Guy. The practice is also on Facebook.

Schwartz, who previously practiced in New York City and White Plains, has been a dentist for six years. “I love the medical field. I never wanted to become a medical doctor,” he said. Schwartz said he followed a family friend who was a dentist. “I fell in love with it right away,” he said.

“We provide almost all dental services,” Schwartz explained, adding his practice his offering more services than the previous practice did.

One of the services is “crown in a day.” Schwartz said. Traditionally, a person gets a temporary crown for about two weeks until the permanent crown is created off site, Schwartz said. But permanent crowns are available on the same day in his new practice. “We’ll take a digital scan and we’ll mill the crown in-house and it’s made in about 30 minutes or so,” he said.

“One of the biggest things that we’re trying to do here is to have the best, newest, state-of-the-art equipment,” Schwartz said. For example, the practice is implementing new cameras to look inside a patient’s mouth and show the image on a big screen television screen.

Some of the other services provided include root canals and implants, Schwartz noted. Services are provided for family members of all ages, he said. “I’d like to keep it as a family practice,” he said. Though most of his patients live in the Croton area, other patients live elsewhere in Westchester, Schwartz said.

The current Croton practice is the first one Schwartz has owned. Being an owner has “definitely more responsibility,” he said. His new responsibilities include working with the staff. “I have a great team,” Schwartz said. “They’ve been really helpful for me getting through this transition.”

Schwartz said he wants his practice to become “the go-to dental office in this area.”

The office of Dr. Scott Schwartz is located at One Baltic Place in Croton. For more information, call 914-271-6224 or visit https://youramazingsmile.com/.