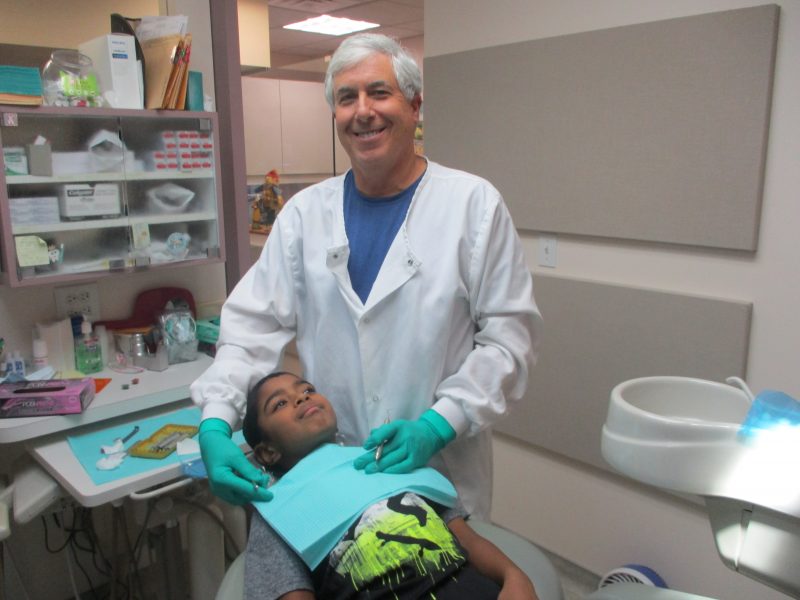 Dr. Mitchell Kahn is shown working with one his patients, Noah Samuel of Somers, at his Yorktown office.
Photo credit: Neal Rentz

Dr. Mitchell Kahn recalled last week how he mulled his options before deciding to become a dentist.

Kahn explained last week why he wanted to become a dentist. “I always loved to work with my hands. I used to play the clarinet and saxophone and draw a lot,” he said. “I had to make a choice, either getting a PHD in genetics or architectural engineering. It seemed like this was a good blend.”

Kahn, who resides in New Fairfield, CT, graduated from dental school in 1983 and has been practicing dentistry ever since. His office is located on Commerce Street in Yorktown.

The practice of dentistry has changed significantly over the years through technological innovations, Kahn said. “We don’t use film in the mouth at all. We use digital radiography,” he said. “The X-rays then are presented on a large computer screen so that I can show patients what’s going on. The resolution and the clarity are superb. And the amount of radiation that patients are typically exposed to is a lot less.”

Another recent innovation is the ability of creating crowns and bridges in a single day. Kahn said he uses the Cerec; the company which he said is the innovators of digital tooth restoration technology. “We’re able to do more and more treatments in the mouth in a digital form,” he said. “The advantages go beyond just being able to fabricate the permanent restoration in one simple visit. There is less discomfort because we can eliminate the impression phase. And there is the ability to also to do a more conservative restoration because we don’t’ typically have to remove as much tooth structure. Being all ceramic, the aesthetics are superior as well.”

The ceramic restorations can be customized to match the adjacent teeth, he said, adding the advanced technology has eliminated the need for temporary crowns.

Implants, which are artificial tooth roots, can be restored in one visit, Kahn said. Orthodontic work is also done in his office, Kahn noted.

“We take of almost all needs,” he said.

Kahn said his staff is like a family. “Most of us have been together now over 15 years and everybody has been involved in dentistry for more than 30 years. So, it’s a very experienced staff,” he said.

His practice includes many families who have had three and four generations of members come to him, Kahn said. Children are particularly comfortable coming to his office, Kahn noted.

“We treat patients from four years old to 103,” Kahn said