The online event, led by three Red Cross volunteers, provided an overview of the resources and survival strategies available to give residents the best practical chance to survive any sort of disaster relatively unharmed.

Tropical Storm Isaias killed two people in New York State alone, shut down the Metro North and Long Island Railroads and caused $4.5 billion in damages in the United States. As a unit, the National Oceanic and Atmospheric Administration (NOAA) named the official 2020 Atlantic Hurricane Season (lasting May 16, 2020 to Nov. 18, 2020) as the most active on record, with 30 named storms – 14 were hurricanes – when the average season sees 12 storms in total.

While no storms are currently approaching, the 2021 Atlantic Hurricane Season that began on June 1, will not end until November 30.

“One of the things that we have also been talking about is what Red Cross is mostly involved in,” said Alex Poku, an American Red Cross volunteer and the main presenter. “The Red Cross is involved in responding to a home fire every eight minutes across this country.”

Their advice for responding to home fires was in-depth, but some important takeaways were the necessity of using the right type of fire extinguisher for the type of fire source you are dealing with, and that residents need to get out of their home within two minutes after hearing a fire alarm go off, as fire can spread very quickly.

Regarding the related issue of carbon monoxide poisoning, the same time limit applies. Other important subjects to remember are not to try to search for the source of the leak, not to operate portable power generators inside and that New York State mandates the use of carbon monoxide detectors in all homes and provides them for free upon request.

The advice provided for navigating an active shooter situation was summarized as Run, Hide or Fight, in that order. First, if there is a viable escape path, run to it, leaving belongings behind, and not attempting to move the wounded (let first responders know their location). If you can’t run, find a safe space, block the entrance, and turn off all lights and device sound to buy yourself time. Only if neither running nor hiding is possible are you advised to fight.

“In situations like active shooter, you are your own first responder.” Red Cross Volunteer Berklea Going said. “These situations happen so quickly that they are often over before law enforcement or help arrives on the scene. You have to prioritize your own safety and ensure your survival.”

General advice on disaster preparation, regardless of the disaster, was provided by Poku. Poku went over survival items residents should buy, essential items for a quick, light 10-day evacuation bag and the necessity of creating a comprehensive Family Emergency Plan that all members of the household understand.

Advice on responding to disasters and their aftermath was provided by Red Cross Volunteer Sean McCarthy. They included the basics of sheltering in place, evacuation, and what to do when trapped.

“Make sure that you and your loved ones are safe,” McCarthy said. “Then, once everything is done on your end, check in on your neighborhood…because that’s how we come back, together.” 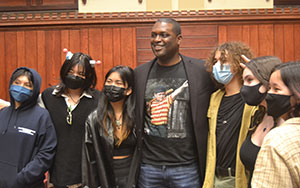