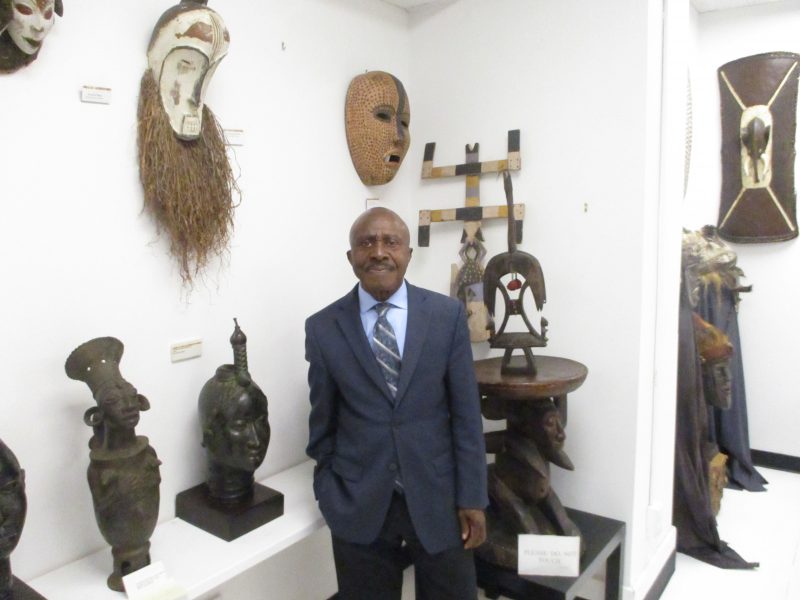 Bronx resident Joe Cobbinah brought a background in African Arts when he opened his gallery in the SoHo section of New York City about 23 years ago.

While he was a youth in his native Ghana, Cobbinah did volunteer work at the Ghana National Museum through a United Nations program.

Cobbinah came to America to attend college at the Rochester (NY) Institute of Technology. When he would go home for school vacations he would come back with artwork, which he would provide as gifts to friends and some of the professors. “I thought about it. I said, oh maybe this could be a good business,” he recalled. Cobbinah eventually started obtaining African art pieces and began to sell them. “People were buying it,” he said.

Cobbinah recalled that he worked for various companies before deciding to own an art gallery.

Cobbinah moved his Dafco’s Art Gallery to White Plains in 2001 and he moved to his current location in the ArtsWestchester building in 2013. “This is a really good city,” he said.

Cobbinah said many of the pieces sold at his gallery were purchased from private homeowners in Africa. “They were not meant to be sold,” he said.

Selling African art is not like selling Coca Cola, Cobbinah said. “When my customers come here sometimes they spend 30 minutes” because they want more information about a particular artwork and what it is used for, he said. Private viewings of the gallery are available by appointment, he said.

One of the features of African art is its functionality. For example, there are artworks available at the gallery that were created to be furniture, he said. “The bottom line is African art is functional,” he said.

Another feature of African art is masks. “Some of them are ceremonial,” Cobbinah said. For example, there are masks that are worn by boys and girls for ceremonies conducted when they reach puberty, he said.

Each piece in the gallery has a description on the gallery’s Web site that is written by Cobbinah.

Dafco’s Art Gallery is located at 31 Mamaroneck Ave., Suite 601, in White Plains in the ArtsWestchester building. For more information call 914-948-4420, send an e-mail to Cobbinah@aol.com or visit https://www.dafcogallery.com/.