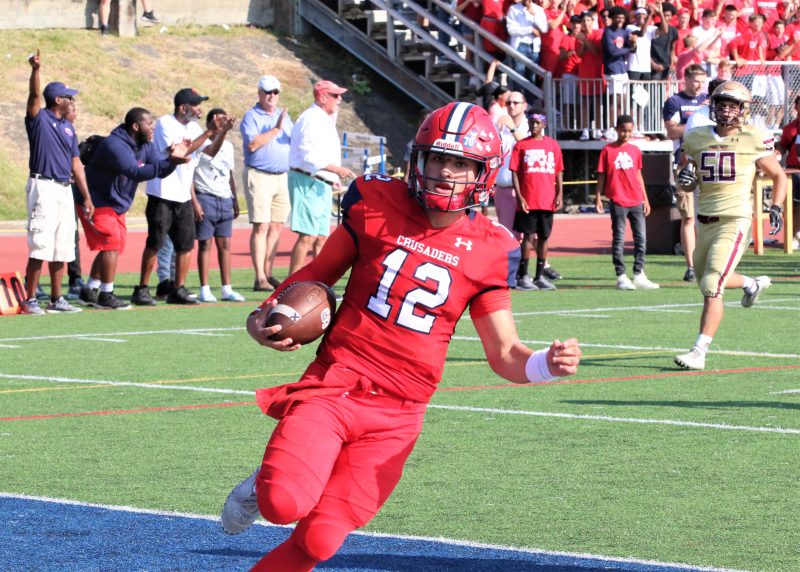 Stepinac quarterback Joey Carino scores on a 72-yard run from scrimmage in the third quarter to put the Crusaders in the lead 28-21. But Iona Prep came back to win the “Gridiron Classic” 36-35, at Stepinac, on Saturday. Albert Coqueran Photo

On Saturday afternoon, the cars were piled in the driveways and parking lot of the school and lined up on Mamaroneck Avenue. You could not park a scooter within a quarter mile of Stepinac High School. What does this mean? Of course, Iona Prep is visiting Paul J. Marbach Memorial Field for what evolved into another gridiron classic.

For the past two regular seasons the results of the Stepinac versus Iona Prep football contests has a differential of a total of six points with the Crusaders on the losing end of both games. The Crusaders lost to the Gaels, 36-34 in overtime last season and 38-34, during the regular season in 2017. Both games are in the CHSFL historical records as nothing less than “Gridiron Classics!”

Stepinac was able to redeem themselves against the Gaels last season by winning the most important game they played against each other, the 2018 CHSFL AAA Semifinals. The Crusaders won the Semifinals classic, 37-26, and went on to become back-to-back CHSFL AAA and CHSAA New York State Football Champions.

On Saturday, there was standing room only in the bleachers and the grassy knoll and paths surrounding the stands were filled to capacity. Approximately, a combined 3500 fans from both high schools were in attendance to cheer their school to victory.

Once again, it was the Gaels (4-0) that surfaced on top in the regular season game by a trick play and of all things, a fumble, which summed the slimmest margin of victory, 35-36. Therefore, in the past three regular season games, the Stepinac vs. Iona gridiron classic has been decided by a total of seven points.

Yes, there were many big plays in the game that sent both sides of the routing population into frenzy. But none more than the hook-and-ladder successfully demonstrated by the Gaels and a fumble by Iona quarterback Darius Wilson, which led to the winning two-point conversion. 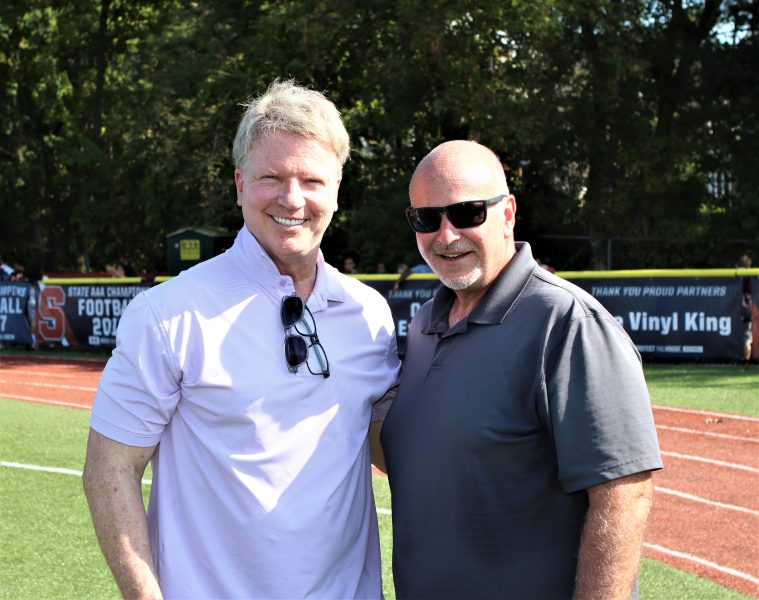 NY Giants legendary quarterback Phil Simms (left), who played 15 years with “Big Blue” and led them to a victory over the Denver Broncos in Super Bowl XXI, observed the talent with Mike Quick (right) of ESPN Radio, at the Stepinac versus Iona Prep game on Saturday at Stepinac. Albert Coqueran Photo

The game went back-and-forth with three ties. Iona was leading, 21-14 at the half but Stepinac bounced back to tie the game 21-21 in the third quarter. With the game tied 21-21, QB Joey Carino sailed into the end zone after running 72 yards from scrimmage, while increasing the Crusaders lead to 28-21.

Three minutes and 19 seconds later, Carino hit running back Mekhi Green with a short pass for a 41-yard catch-and-run touchdown. The Crusaders (3-1) had a commanding, 35-21 lead at the end of the third quarter.

Nonetheless, the momentum started to shift the Gaels way when Carino fumbled on the Iona 33-yard line early in the fourth quarter. The Gaels capitalized on the turnover as running back Frankie McFadden scored on a seven-yard run to bring Iona within seven points at 35-28.

Then with 3:05 remaining in the game, Gaels Head Coach Joe Spagnolo surprised everyone except for his own team by calling the old hook-and-ladder play, which went for 61 yards to the Stepinac 22-yard line. Spagnolo was known for his inventive offenses, while he was the Assistant Coach and Offensive Coordinator for Stepinac for 10 years, before joining the Gaels.

Gaels QB Wilson handed off to Avery Turton in the backfield when he stopped suddenly and pitched back to Jarel Washington, who ran 61 yards to the Stepinac 22-yard line.

The success of the hook-and-ladder setup a Gaels touchdown and the controversial winning play of the game. Wilson hit his wide receiver Alex Wilson with a nine-yard touchdown pass which made the score 35-34 Stepinac with 1:59 left in the game.

The Gaels decided to go for the win with a two-point conversion. Wilson was stopped before the goal line but reached out to put the ball in the end zone. The ball was knocked away and as the Stepinac crowd celebrated, Williams picked the ball out of the air and scored for the Gaels.

Initially the referees called the play no good but after a brief huddle awarded the two-point conversion to the Gaels. The referees ruled that Wilson unintentionally fumbled the ball forward which kept the ball live when Williams recovered in the end zone.

“It was a crazy play, it was a sweep and we kept it up the middle. I went to stretch out and the defense poked the ball away and my receiver recovered and scored,” depicted the Gaels quarterback. The game ended on Gaels Jordan Dunbar’s interception in the end zone as the Crusaders were threatening to score.

Both teams would have to admit that this game may have been the greatest of the Stepinac versus Iona Prep rivalry games. But Stepinac (3-1) goes down in defeat by one point, 36-35, for their first loss this season.